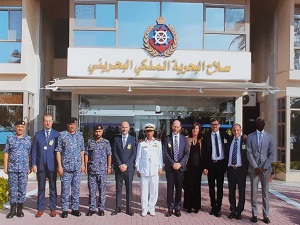 The RBNS Al Muharraq was delivered by Italian defense contractor Leonardo under a six-vessel upgrade contract signed in 2015. The upgrades include a new weapon control system, training services and logistics.

Al Manama, the lead ship was upgraded in December 2017 and delivered to Bahrain in January 2018. The Al-Manama-class vessels were built for Bahrain by German shipbuilder Lürssen with deliveries starting in 1987. Overall two of the 63-meter vessels were built.

FPB 62 patrol combatants displace 650 meters and have a complement of 40. According to shipbuilder specifications, they were delivered with an OTO Melara 76 mm gun, an Otobreda 40 mm gun, MM40 Exocet anti-ship missiles and Dagaie decoys.