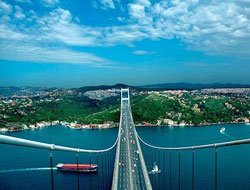 World?s oil supply is no less vulnerable and perhaps even more susceptible to geopolitical forces than it was before the financial meltdown.

World"s oil supply is no less vulnerable and perhaps even more susceptible to geopolitical forces than it was before the financial meltdown.

While most forecasters expect oil to remain in the $50 to $60 range for 2009, the world"s oil supply is no less vulnerable?and perhaps even more susceptible?to geopolitical forces than it was before the financial meltdown. Last week"s upturn in oil prices were attributed to Israeli attacks in Gaza, a natural gas dispute between Russia and Ukraine, and OPEC"s announced production cuts. Vulnerabilities are most prevalent in the world"s six major oil transit chokepoints?where the threat of terrorist attack, theft from pirates, political unrest, and shipping accidents post real dangers. More than 40 billion barrels of oil are shipped every day along these narrow channels. A single incident in one of these locations could immediately wake American consumers up from the current lull in prices?and disrupt a sense of complacency about the real costs of filling up our cars and trucks.

The Bosporus Strait is one of the busiest and most dangerous chokepoints in the world. The 17-mile long waterway located in Turkey supplies Western and Southern Europe with oil from the Caspian Sea Region. In 2006, an estimated 2.4 million barrels per day of mostly crude oil flowed southbound through this passageway. Only half a mile wide at its narrowest point, the Turkish Strait is one of the world's most difficult waterways to navigate due to its sinuous geography. With 50,000 vessels, including 5,500 oil tankers, passing through the straits annually it is also one of the world"s busiest oil routes.

The Strait of Malacca

The Strait of Malacca, linking the Indian and Pacific Oceans, is the shortest sea route between the Middle East and growing Asian markets. At its narrowest point, Malacca is only 1.7 miles wide, creating a natural bottleneck?as well as potential for collisions, grounding, or oil spills. Recent reports by the International Chamber of Commerce show that piracy, including attempted theft and hijackings, is a constant threat to tankers in the Strait of Malacca.

The Suez Canal is located in Egypt, and connects the Red Sea and Gulf of Suez with the Mediterranean Sea. Oil shipments from the Persian Gulf travel through the Canal primarily to European ports, but also to the United States. More than 3,000 oil tankers pass through the Suez Canal annually. Rampant piracy off Somalia's coast has recently hit revenues at the Suez Canal. Shippers are avoiding the canal following the capture by Somali pirates of a Saudi Arabian supertanker loaded with $100 million worth of oil in November 2008.

The Strait of Bab el-Mandab

The Strait of Bab el-Mandab is a chokepoint between the horn of Africa and the Middle East, and a strategic link between the Mediterranean Sea and Indian Ocean. It is located between Yemen, Djibouti, and Eritrea, and connects the Red Sea with the Gulf of Aden and the Arabian Sea. In 2006, an estimated 3.3 million barrels per day flowed through this waterway toward Europe, the United States, and Asia. The Strait is 18 miles wide at its narrowest point, with two 2-mile-wide channels for inbound and outbound shipments. Bab el-Mandeb was the site for of a naval blockade of Israel by Egypt in the 1973 Yom Kippur War.

The Panama Canal is an important route connecting the Pacific Ocean with the Caribbean Sea and Atlantic Ocean. A half-million barrels per day of crude and petroleum products were transported through the canal in 2006. The Canal is 50 miles long, and only 110 feet wide at its narrowest point, called the Culebra Cut. The Panama Canal is not a significant route for US petroleum imports, but like all important thoroughfares, closure of the Panama Canal would greatly increase transit times and costs adding over 8,000 miles of travel.