Urgent safety tests to be fulfilled 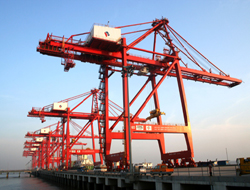 The UK Health and Safety Executive is telling all users of workhorse port cranes made by now-defunct British manufacturer Morris to carry out urgent safety tests.

The UK Health and Safety Executive is telling all users of workhorse port cranes made by now-defunct British manufacturer Morris to carry out urgent safety tests.

The UK Health and Safety Executive is telling all users of workhorse port cranes made by now-defunct British manufacturer Morris to carry out urgent safety tests, following the collapse of two units of this marque at DP World Southampton in the last 18 months.

The second accident took place on Monday this week, crushing the legs of operator Jay Squibb, who is now in a critical but stable condition in Southampton General Hospital.

It now seems that no other cranes of precisely the same model are in service in the UK, despite earlier fears to the contrary. But as the maker went into administration in or around 2001, it is unclear whether any were exported. Moreover, other Morris models, some now relatively elderly, remain commonplace on the British waterfront.

DP World Southampton has voluntarily suspended the operation of three Morris units after this week"s incident, in which a crane crashed down onto boxship NYK Themis, pending an investigation into what the company described as ?concerns?.

The company did not respond to a telephone query asking it to specify the nature of these concerns.

However, it said in a statement that on initial indications, it is unlikely that this latest accident had a similar cause to the previous boom collapse. Shipside operations resumed on the Tuesday night shift, utilising six quay gantry cranes and a mobile harbour crane.

Nigel Parfitt, head of Ports Skills and Safety writes: ?Although it is too early to be sure of the exact cause of failure of the Morris dockside crane at Southampton on 13 July 2009, there are questions about any dockside crane that has a tubular collared or sleeved backstay, particularly where final assembly has taken place on site and welding has taken place in wet weather or the welding allows water ingress.

?The particular Morris Crane involved in the incident was installed in 1993, and although there are few if any identical designs in the UK, there may be others worldwide. As a precautionary measure it may be advisable for users of any Morris dockside crane to have the backstays None Destructive Testing [NDT] tested [sic] for reassurance.?

Mr Parfitt was not immediately available for comment. But a source close to the investigation confirmed that the HSE is recommending users undertake backstay tests, although it cannot order them to do so. One of the crane"s original designers is currently on site in Southampton, assisting HSE efforts, and according to him, the design is unique.

The source added: ?Part-way up the sleeves or collars, there is a junction point, and it [the crane] has failed at that junction point. What we are concerned about is failure of that weld area. It could be because of bubbles [in the weld], because of the weather, or because of cracking.?

Workforce sources in Southampton are angry that in the eight months since this email was sent, Morris units stayed in service. Ms Barringer said that although her name was on the email, her job is to formulate policy and that she could not respond to technical questions.

This news is a total 1726 time has been read