US, Canada Start Evacuating Passengers on board Diamond Princess as Coronavirus Cases Hit 355 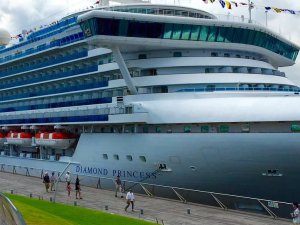 The United States and Canada are sending airplanes to Japan to evacuate their citizens from the cruise ship Diamond Princess which has been quarantined in Yokohama, Japan for almost two weeks amid coronavirus outbreak.

Based on the latest update from the Japanese Ministry of Health, there have been 355 confirmed coronavirus infections on board the cruise ship, the largest number of infections in one place outside mainland China.

Passengers with confirmed symptoms of the virus are being disembarked and admitted for medical care in infectious disease hospitals in the Yokohama area.

The Government of Canada has chartered a plane to repatriate Canadians from the cruise ship.

As informed, the aircraft will bring passengers from Japan to Canadian Forces Base Trenton, after which they will be assessed and transported to the NAV Canada Training Institute in Cornwall, Ontario, to undergo a further 14-day period of quarantine.

“Before boarding in Japan, passengers will be screened for symptoms. Those who exhibit symptoms of COVID-19 will not be permitted to board and will instead be transferred to the Japanese health system to receive appropriate care,” the government said, adding that the decision was taken to lighten the burden on the Japanese health-care system.

“We are working closely with Carnival Cruise Lines and the Government of Japan to assist in this evacuation.”

The U.S. Department of State (DoS), working closely with the Department of Health and Human Services (HHS) and other partner agencies, is also providing a chartered aircraft to bring its passengers from Japan to the United States.

There are approximately 400 U.S. citizens onboard the Diamond Princess cruise ship.

The aircraft was scheduled to arrive in Japan on the evening of February 16. The U.S. Embassy in Tokyo told passengers that they would be screened for symptoms before being allowed to board the flight.

For those not allowed to board they will be taken over by Japanese authorities for required care.

“The aircraft will land in the United States at Travis Air Force Base in California. Some passengers will then continue onward to Lackland Air Force Base in Texas,” the embassy said, adding that the final destination is yet to be confirmed.

The embassy added that travelers returning to the United States from high-risk areas are required to undergo a quarantine of 14 days when they arrive in the U.S.

For passengers that choose not to return on this charter flight, they will be unable to return to the United States for a  period of time yet to be determined.

The latest outbreak of the virus has had a considerable impact on the itineraries in the Asian cruise market, with cruise liners continuing to cancel or alter their sailings throughout February, March, and April.

Royal Caribbean Cruises has so far canceled a total of eighteen sailings in Southeast Asia and modified several itineraries due to travel restrictions aimed at containing the coronavirus.

Due to the ongoing situation, Princess Cruises has canceled additional voyages on Diamond Princess until late April.

“Based on the prolonged quarantine period, and the anticipated time to prepare the ship to return to service, we, unfortunately, must cancel additional Diamond Princess voyages through the April 20 voyage. We are preparing Diamond Princess to return to service April 29, 2020, for the start of Japan’s annual Golden Week celebrations,” the company said.

Furthermore, due to port restrictions and closures and lack of predictability regarding port availability, Princess Cruises had to cancel additional Asia voyages on its ships Sapphire Princess and Majestic Princess extending into June.

“All booked guests will receive a full refund, back to the original form of payment, of their cruise fare, Princess Air, pre- and post-cruise hotel packages, prepaid shore excursions and other prepaid items, and taxes, fees, and port expenses,” the cruise liner added.

The latest update from the World Health Organization (WHO) shows that the number of laboratory-confirmed cases of coronavirus has risen to 51, 857, out of which 51, 174  are in China. The country has recorded 1,666 deaths, as of February 16th.

Outside China, there are  683 laboratory-confirmed cases across 25 countries. The virus has claimed three lives outside China, including one in the Philippines, one in Japan and one in France.

This news is a total 1589 time has been read
Tags: coronavirus, Diamond Princess.