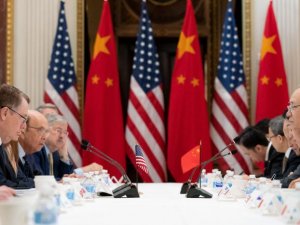 The United States and China have signed a “phase one” trade agreement that is expected to ease trade tensions between the largest two economies in the world.

The deal was signed between the US President Donal Trump and China’s Vice President Liu He in Washington on January 15, 2020.

“This agreement will begin rebalancing our trade relationship with China and provide new opportunity for American businesses and farmers,” the White House said in a statement.

Under the deal, China has pledged to increase imports of American goods and services by at least USD 200 billion, compared to 2017 levels. The country has also agreed to end its practice of forcing foreign companies to transfer their technology to Chinese companies in order to gain market access and address longstanding intellectual property concerns.

On the other hand, the US has agreed to halve some of the tariffs imposed on Chinese goods. However, it will maintain 25 percent tariffs on a USD 250 billion worth of Chinese products.

This news is a total 303 time has been read
Tags: China, trade agreement, trade war, US.