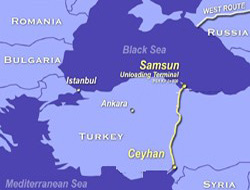 The United States congratulated Turkey and the developers of the Samsun-Ceyhan oil pipeline for the historic groundbreaking.

The United States congratulated Turkey and the developers of the Samsun-Ceyhan oil pipeline for the historic groundbreaking.

Releasing a statement on Tuesday, the U.S. Embassy in Ankara said that this project has great potential for enhancing global energy security as an alternative to the congested straits.

The statement noted, "we strongly support the concept of multiple pipelines to enhance global competition and to ensure diversity and security of energy supply. We wish the Samsun-Ceyhan project well in gaining oil throughout commitments to achieve its commercial success. Building on the success of the Baku-Tbilisi-Ceyhan oil pipeline, we are supportive of the development of Ceyhan as an energy center."

It indicated, "the United States also looks forward to continuing to work with Turkey and its neighbors on regional cooperation and toward establishing the commercial framework necessary for sustaining a southern gas corridor to Turkey, and through Turkey to the rest of Europe, from countries such as Azerbaijan, Kazakhstan, Turkmenistan, and Iraq."

This news is a total 1402 time has been read