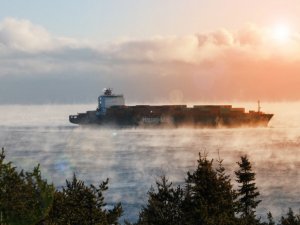 German shipping major Hapag-Lloyd is conducting the first biofuel test on one of its vessels in an effort to reduce the company’s CO2 footprint.

The 4,402 TEU containership Montreal Express was recently refueled with a new, eco-friendly biofuel in Rotterdam.

As informed, Hapag-Lloyd intends to use the test run with the abovementioned vessel, which operates in the St. Lawrence Coordinated Service 2 (AT 2) between Europe and Canada, to gain experience and information on the properties of the fuel in real-world use.

“We are checking to see whether the share of biodiesel has any adverse effects on the equipment and the fuel processing on board the vessel. If the test is successful, more ships from Hapag-Lloyd’s fleet could operate using the ‘B20’ fuel in future,” according to Jan Christensen, Senior Director Purchasing & Supply at Hapag-Lloyd.

For the first time, the Panamax boxship is being powered by the so-called “B20″ fuel, which consists of 80 percent low-sulphur fuel oil and 20 percent biodiesel based on cooking oils and fats that had previously been used in the food service/catering industry. This biodiesel generates up to 90 percent less CO2 emissions than conventional fuels, the company explained.

With this test, the German shipping giant is taking another step towards reaching its ambitious climate-protection goals. Hapag-Lloyd is also joining its counterparts Maersk and CMA CGM that completed biofuel tests last year.

“By the end of this year, we want to have reduced our specific CO2 emissions by 50 percent compared to the reference year 2008. Biofuels like ‘B20’ can help us reach this target,” Jörg Erdmann, Senior Director Sustainability Management, said.

“This is because, in addition to having a low sulphur content, the fuel also emits less climate-damaging CO2 during combustion,” he added.

Hapag-Lloyd currently has a fleet of 231 containerships and a total transport capacity of 1.7 million TEU.

This news is a total 544 time has been read
Tags: Biofuel, Containership, Hapag-Lloyd.