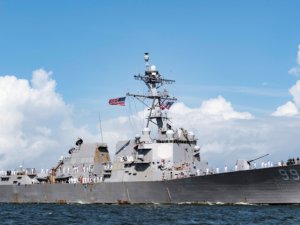 On January 9, 2020, while conducting routine operations in the North Arabian Sea, the US Navy’s Arleigh Burke-class destroyer USS Farragut (DDG 99) had a close encounter with the Russian Navy’s intelligence ship Ivan Khurs.

The US Navy described the approach as “aggressive”, saying that it increased the risk of collision.

“Farragut sounded five short blasts, the international maritime signal for danger of a collision, and requested the Russian ship alter course in accordance with international rules of the road,” the US Navy said in a statement.

“The Russian ship initially refused but ultimately altered course and the two ships opened distance from one another.”

On January 10, the Russian Defense Ministry announced that the country’s Defense Minister, S.K. Shoigu, had a phone conversation with his US counterpart M. Esper during which they discussed “the situation in the Middle East.” The ministry did not mention the two navies’ close encounter in the Arabian Sea.

This is not the first time a Russian Navy ship approached a US Navy vessel at sea.

In June 2019, Russian Udaloy-class destroyer Admiral Vinogradov came within 15 meters of the US Navy cruiser USS Chancellorsville (CG-62) in a close encounter in the Philippine Sea.

According to the US Navy, USS Chancellorsville was forced to execute all engines back full and to maneuver to avoid the collision.

On the other hand, Russia’s Pacific Fleet blamed the USS Chancellorsville for the encounter, saying Admiral Vinogradov was the one undertaking emergency action to avoid a collision, according to Russian media reports.

This news is a total 331 time has been read
Tags: Ivan Khurs, Russian Navy, US Navy, USS Farragut