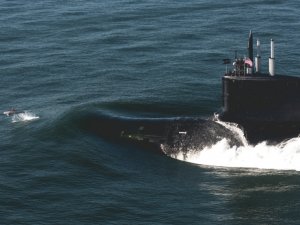 The US Navy has commissioned its newest fast-attack submarine, USS Delaware (SSN 791).

Built at Huntington Ingalls Industries’ Newport News Shipbuilding and delivered to the navy in October 2019, Delaware is the 18th Virginia-class attack submarine.

Although the traditional public commissioning ceremony was canceled for public health safety and due to restrictions on large public gatherings, the US Navy commissioned USS Delaware administratively on April 4 and transitioned the ship to normal operations.

Delaware’s commanding officer, Cmdr. Matthew Horton, said today marks the culmination of six years of hard work by the men and women who constructed the submarine and are preparing her to become a warship.

This is the first time in nearly 100 years the name Delaware has been used for a US Navy vessel. It is the seventh US Navy ship, and first submarine, to bear the name of the state of Delaware.

The submarine is 377 feet long, has a 34-foot beam, and will be able to dive to depths greater than 800 feet and operate at speeds in excess of 25 knots submerged. It will operate for over 30 years without ever refueling.

It is the final Block III Virginia-class submarine, before the next wave of Block IV deliveries.

This news is a total 649 time has been read
Tags: submarine, US Navy, USS Delaware, Virginia-Class.TURKISH MARITIME NEWS