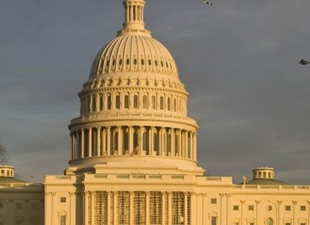 The chamber voted 62-36 to approve the controversial oil pipeline that will carry Canadian heavy crude to U.S.

The U.S. Senate voted Thursday to approve the construction of the Keystone oil pipeline to carry heavy crude oil from the Canadian tar sands to U.S. Gulf Coast refineries, despite a veto threat from President Barrack Obama.

The chamber voted 62-36 to authorize the controversial Keystone XL pipeline, while nine Democrats joined the Republican caucus to support the bill that passed following three weeks of debate on 41 amendments.

However, the Senate, under the new Republican majority, was five votes shy to clear a presidential veto.

President Barack Obama threatened to veto the bill on Jan. 6 if the U.S. House would approve it.

On Jan. 9, the Republican-controlled U.S. House of Representatives passed a bill to approve the oil pipeline, voting 266-153 to authorize the pipeline, while 28 Democrats joined the Republican camp on the issue that day.

The Obama administration has postponed the approval of the pipeline for six years, due to environmental and political concerns.

According to U.S. oil experts, the country still needs heavy crude oil, although the U.S. crude oil imports decreased over the years with high domestic light oil production since 2008.

Before the shale oil boom in 2008, most of the U.S. refineries were designed for heavy type crude oil, which was imported from overseas.

The approval of the Keystone pipeline would divorce the U.S. from the uncertainties of overseas sellers who posed risks to the uninterrupted oil supplies due to political instability in their regions.

To carry heavy crude oil from Alberta's tar sands through Nebraska and Oklahoma to reach the U.S. refineries on the Gulf coast, the northern extension of the pipeline, Keystone XL, would provide an additional capacity of 500,000 barrels per day, says its operator TransCanada.

This would have brought the total capacity of the 2,150 mile long (3,460 kilometers) pipeline to more than one million barrels a day, with the total investment reaching $12.2 billion, according to TransCanada's website.

This news is a total 2639 time has been read
Tags: U.S., Barack Obama, Keystone