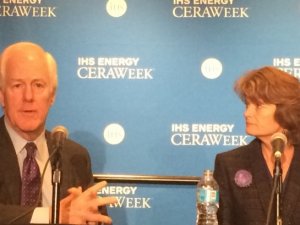 'We can offer our friends to diversify ... our allies need the energy that we can provide,' one senator says

Two American senators on Friday called for enhancing energy security of their country's allies in Europe and Asia through a more active U.S. role in the global energy world.

"Countries like Russia and Iran are major suppliers of NATO and our allies in Asia. And, they can use their energy supplies over our allies ... we can offer our friends to diversify their energy security," he said.

Russian President Vladimir Putin is "filling the void while the U.S. is receding its influence in international arena,” according to Cornyn.

"In Ukraine, we saw Russia using energy as a tool to bring other countries to their heels ... our allies need the energy that we can provide," he added.

Europe imports approximately 30 percent of its total gas consumption from Russia, while Turkey depends on Russian gas – about 55 percent, and 20 percent of Iranian gas, in its energy mix.

"Whether with our liquefied natural gas (LNG) or our oil ... to move these commodities to friends and allies ... this is a global energy game changer, it is freedom," said Sen. Lisa Murkowski, who is also the chairwoman of the Senate Energy and Resources Committee.

She added that the Senate Energy Committee has been working on a bipartisan energy bill that for more than a year, called "Energy Policy Modernization Act," which will upgrade American energy policies, allow it to be an energy superpower, and help the U.S.'s trading partners around the world.

During the Obama administration, the U.S. government approved only 10 LNG export facilities. The slow authorization process has been criticized by some Republicans during last year.

Murkowski told Anadolu Agency on the sidelines that the new legislation "puts a time frame on the period of the applications that could be considered. Right now the average time is around 115 days, our bill will say 45 days, to make sure there is a process that keeps moving, instead of getting stalled. That has been our challenge."

Cornyn pointed to Turkey's high dependency on Russian gas, and told AA, "well, that's the perfect example of the reason why Turkey and other allies would benefit from the diversification of their energy supplies. Part of this current legislation, that is pending, would do is to expedite the permitting process for LNG export terminals."

This news is a total 2560 time has been read
Tags: senators, want, energy, security, for, allies, Turkish, Maritime