US stocks mixed ahead of Fed rate hike decision 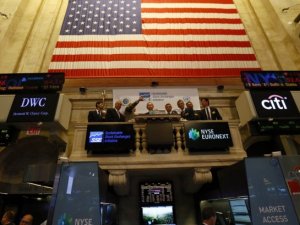 The American stock market closed mixed Tuesday ahead of an announcement on interest rates by the Federal Reserve.

Oil prices extended their losses for a second day in a row. After falling 4 percent Monday, American benchmark West Texas Intermediate lost 3.6 percent to reach as low as $35.97 per barrel.

Global benchmark Brent crude recorded a 3.7 percent decline on Monday, and lost 3.4 percent Tuesday to a low of $38.33. A production freeze agreement among Saudi Arabia, Russia, Venezuela and Qatar will not be joined by Iran, who said it would continue to increase its output until it reaches pre-sanctions levels of 4 million barrels per day.

The stock market has sharpened its focus on the Fed's interest rate decision Wednesday at 1800GMT.

Interest change in rates is not expected but a statement could signal a June rate hike.

This news is a total 3440 time has been read
Tags: stocks, mixed, ahead, of, Fed, rate, hike, decision, Turkish, Maritime