US Targets Iran's Metals and Shipping Industries with New Sanctions 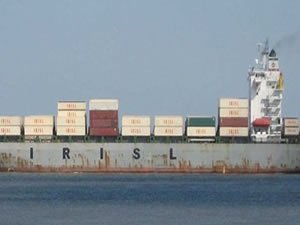 Saying that the Iranian regime uses revenue from its metals sector to fund destabilizing activities around the world, the U.S. government imposed sanctions on 17 companies. The wide-reaching effort included not only Iranian companies, but also one Chinese company as well as ones headquartered in Germany and the U.K. While the effort mostly targeted the metals companies the shipping industry was also included in its participation in the trade.

Iran-based Hafez Darya Arya Shipping Company (HDASCO), a subsidiary of the Islamic Republic of Iran Shipping Lines (IRISL), was included in the action for knowingly sell, supplying, or transferring, directly or indirectly, graphite to or from Iran. The U.S. says that the graphite was sold, supplied, or transferred to or from an Iranian person, South Kaveh Steel Company and Arfa Iron and Steel Company, which is included on the Department of Treasury’s Specially Designated Nationals List. The State Department also imposed sanctions on Majid Sajdeh, who is a principal executive officer of HDASCO.

The China-based Kaifeng Pingmei New Carbon Materials Technology Co., LTD (KFCC) was also cited under the same action. The US reports that the organization also participated in the trade of graphite with Iran. Additionally, Germany-based GMI Projects Hamburg GmbH, UK-based GMI Projects Ltd., and China-based World Mining Industry Co., Ltd. were also designated for being owned or controlled by Middle East Mines and Mineral Industries Development Holding Company, which is part of the main group of sanctioned companies.

In announcing the latest actions, U.S. Secretary of State Michael Pompeo said the United States will continue to aggressively implement sanctions with respect to the Iranian regime, those who evade sanctions, and others who enable the regime to fund and carry out its malign agenda of repression and terror.

During its term, the Trump administration increasingly sought to target Iran with sanctions. Among the companies included in the prior sanctions were Iran’s two shipping companies, the National Iranian Tanker Company (NITC) and IRISL, which was also included in these latest actions.

This news is a total 5098 time has been read
Tags: iran, iran sanctions, Tehran , U.S. , US Targets Iran's Metals and Shipping Industries with New Sanctions