US to breach international law 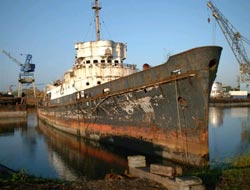 Two US-flag ships sold by a US company will be scrapped and says that would mean the US would be breaching international law.

Two US-flag ships sold by a US company will be scrapped and says that would mean the US would be breaching international law.

Green campaign group Basel Action Network (BAN) says it thinks two US-flag ships sold by a US company will be scrapped and says that would mean the US would be breaching international law. BAN says one of the ships, the 1979-built, 21,050 dwt ro-ro ex-Pvt James Anderson Jr, sailed from Norfolk, Virginia, on Tuesday (25 August) a the St Kitts & Nevis Anders. The group says it expects the other vessels, the ex-1St Lt Alex Bonnyman, to also leave Norfolk very soon.

BAN claims the export ?marks the first time the US government has allowed a US flagged ship in the service of the government to be sent to South Asian beaches since the Clinton Administration called for a moratorium on such exports in 1998.

BAN alleges the sale of the ships could break the Jones Act, regarding US-flagged ships, and the Toxic Substances Control Act (TSCA) which forbids the export or the "distribution in commerce" polychlorinated biphenyls (PCBs). BAN says there are high concentrations of PCBs on the ships.

The group says it sent a series of letters to the EPA and MARAD warning them of the ?imminent and likely violations of US laws and called specifically upon the EPA to at least require the ships to be tested for PCBs prior to export?. ?But,? BAN says, ?to the great surprise of the environmental watchdog organization, that had worked with the EPA in numerous instances in the past, the Obama administration refused to act.?

"This is really shocking. All through the Bush Administration the EPA took action every time we warned them of a pending TSCA violation and their record of enforcement was strong. Now we have elected an environmental president and his administration for the first time in ten years is willing to ignore the law and dump toxic waste onboard US flagged ships on developing countries," said Jim Puckett, BAN's executive director.

This news is a total 2099 time has been read