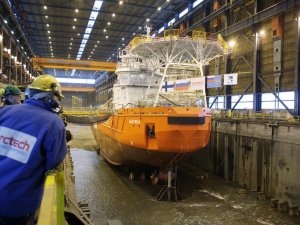 Russia’s United Shipbuilding Corporation has bought another 50 percent of shares in Arctech Helsinki Shipyard from STX Finland Oy, becoming the sole owner of the Finnish shipbuilder.

Arctech Helsinki Shipyard Inc. was founded in December 2010, when United Shipbuilding Corporation bought the first 50 percent of the shipyard shares from STX Finland, a subsidiary of the Korean owned STX Europe.

The joint venture was established to respond to the need of growing market of Arctic shipbuilding and to unite the Finnish and Russian maritime clusters. The new ownership arrangement is expected to further strengthen the Finnish-Russian shipbuilding cooperation.

”We have closed the transaction on acquisition of the remaining 50 percent of Arctech Helsinki Shipyard Inc. Now this company is 100 percent owned by USC. Arctech Helsinki Shipyard has wide experience in building ice-class supply vessels and different civil ships. So we have obtained not only full access to technical documentation and the know-how but also to the people who can share this knowledge. The company has efficient assets, but the advantage of the asset is in its human potential,” said Aleksey Rakhmanov, the Managing Director of USC.

At the moment Arctech is building six icebreaking vessels. The first vessel, a Baltic icebreaker for the Russian Ministry of Transport, is due to be delivered in autumn 2015. The second vessel, the world´s first LNG-powered icebreaker for the Finnish Transport Agency, will be delivered by the beginning of 2016. In spring 2014 Arctech was awarded a contract to build an icebreaking supply vessel for the Russia´s largest shipping company Sovcomflot. Early summer, Arctech received an additional order of three icebreaking stand-by vessels. The company’s order book now extends until summer 2017.