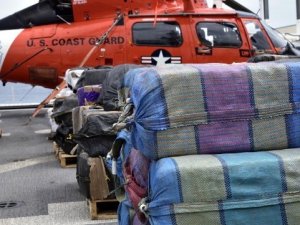 The Coast Guard Cutter James arrived in Port Everglades, Florida offloading approximately 23,000 pounds of cocaine and approximately 6,900 pounds of marijuana, with an estimated value of $408 million, seized in a series of recent actions.

The Coast Guard reported that the drugs were interdicted in international waters of the Eastern Pacific Ocean off the coasts of Mexico, Central, and South America, and in the Caribbean during 11 interdictions of suspected drug smuggling vessels by four Coast Guard cutters and two U.S. Navy ships. The interdictions, including the boardings, were led and conducted by members of the U.S. Coast Guard.

"The roughly 15 tons of illicit narcotics being offloaded here today and the likely ensuing prosecutions, are the results of extraordinary teamwork and intelligence-driven operations," said Adm. Karl Schultz, commandant of the Coast Guard. "It is important to note that our fellow citizens aren't the only ones who benefit from these counter-narcotics efforts. Our Central American neighbors face tremendous strain from drug-fueled violence sparked by transnational criminal organizations. Efforts like this enhanced counter-drug operation significantly disrupt the criminal activity destabilizing the region."

This news is a total 949 time has been read
Tags: USCG Cutter James Offloads 10 Tonnes of Cocaine in Port Everglades