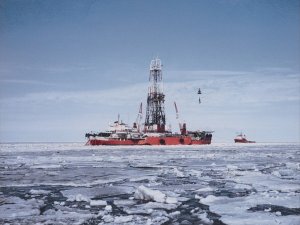 The onset of Shell’s Arctic drilling has forced the U.S. Coast Guard to divert some of its resources. The USCG has sent five vessels to Chukchi to ensure that the oil and gas company complies with environmental regulations.

The USCG has also established a helicopter base in Deadhorse, Alaska to support Shell’s exploration. Two Jayhawk helicopters will be stationed at the base. If Shell were to suffer an incident, the Coast Guard will extend patrols, cancel training exercises and extract resources from remote areas in response.

Shell’s Arctic drilling operations were approved July 22 amid criticism and protests, particularly in the Pacific Northwest, in regard to the environmental impact this could have on the region. Shell and the USCG have attempted to quell anxiety by implementing new disaster response strategies.

In May, Shell unveiled its worst-case scenario plans if an oil spill were ever to occur. Shell agreed that it would be subject to Bureau of Safety and Environmental Enforcement (BSEE) inspections and those inspectors arrived in Chuckchi August 7. The inspectors will be on-site at all times. MarEx reported on this and the rest of Shell’s drilling and exploration terms in an article you can read here.

The last time Shell explored the Arctic was 2012. There were several incidents, including an out of control rig running aground and being scrapped. The Coast Guard dispatched its helicopters to rescue 18 of the vessel’s crew. The USCG was critical of Shell’s safety preparedness following the incident.

But Shell’s preparedness may not be the only one in question. In 2014, the American Petroleum Institute released a report stating that the USCG did not have the necessary infrastructure in place to respond to disastrous spills.

“It is unlikely that responders could quickly react to an oil spill unless there were improved port and air access, stronger supply chains, and increased capacity to handle equipment, supplies, and personnel,” it reads.

It remains to be seen if the Coast Guard’s increased presence in addition to Shell’s new response strategies will suffice if disaster strikes.

This news is a total 31558 time has been read
Tags: uscg, coast guard, shell, arctic, turkishmaritime