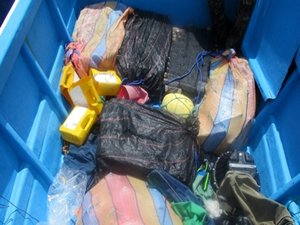 Last week, the U.S. Coast Guard seized about 1,400 pounds of cocaine from a go-fast vessel off the Pacific coast of Central America.

On April 1, U.S. Southern Command began enhanced counter-narcotics operations in the Caribbean and the Eastern Pacific in response to a presidential directive. All of the primary Department of Homeland Security agencies - especially the Coast Guard - are part of the mission.

The law enforcement phase of counter-smuggling operations in the Eastern Pacific is conducted by the 11th Coast Guard District, which is headquartered in Alameda. The interdictions, including the boardings, are led and conducted by members of the U.S. Coast Guard - even for intercepts made by U.S. Navy and Canadian Navy warships.

Recent research indicates that most of the cocaine headed north from Colombia is ultimately bound for Europe and other overseas markets, where prices are higher than in the United States. Central American container ports like Colon serve as transshipment hubs for these cargoes, and the majority of the northbound trafficking across the Caribbean and Eastern Pacific may be aimed primarily at moving cocaine closer to these seaports - not to the U.S. border.

This news is a total 1853 time has been read
Tags: USCG Intercepts $24M Cocaine Cargo Off Central America