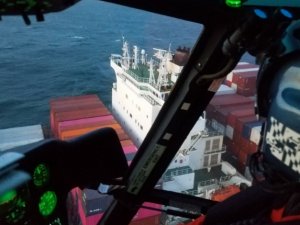 An injured crew member of a Taiwan-flagged containership has been evacuated some six miles from the San Francisco Bay, the US Coast Guard (USCG) said.

As informed, the 32-year-old Taiwanese seafarer suffered a head injury caused by an accident on board the 8,626 TEU YM Unanimity in the evening hours of April 3.

The unfortunate man had fallen and struck his head on the ship’s radar mast creating a laceration on his forehead as the Post-Panamax boxship was making its way toward its next port call in Japan.

After receiving a report on the accident, USCG Sector San Francisco watchstanders launched a helicopter crew to medevac the crewmember.

The man was reported to be in stable condition.

Built in 2012, YM Unanimity is owned by Taiwan-based shipping company Yang Ming Marine Transport. At the time of the accident, the vessel departed the US Port of Oakland and was en route to the Japanese Port of Kobe, data provided by VesselsValue shows.