USCG: Positive Drug Tests On the Rise for Mariners in Western Alaska 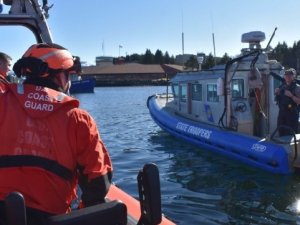 The U.S. Coast Guard reported Monday that its inspectors are finding an increase in the number of positive drug tests for non-credentialed mariners (fishermen) in the Arctic and Western Alaska.

In 2019, there was a positive test rate of 15 percent for the year among non-credentialed mariners in the Sector Anchorage area, a giant swath of coastline and sea covering the majority of Alaskan waters. The positive test rate increased to 22 percent in the first half of 2020. The most common drug that the mariners tested positive for was marijuana.

The sale, possession and use of marijuana are broadly legal under state law in every West Coast state, including Alaska, and polling indicates that about 15 percent of all adults in the western United States use the substance. However, both federal law and Alaska state law prohibit its use aboard commercial fishing vessels, and federal law still prohibits its use in general. Unlike alcohol, marijuana's active ingredient can often be detected by standard drug testing weeks after its use.

As the Coast Guard is a federal agency and an MMC is a federal license, credentialed mariners are prohibited from using marijuana. Testing positive for marijuana on a drug test has licensing implications.

Inspectors with Sector Anchorage's Marine Safety Task Force also observed a troublingly large incidence rate for unserviceable or missing life-saving equipment aboard commercial fishing vessels. Between June 8 and June 22, members of the task force removed nearly 120 immersion suits during commercial fishing vessel exams in the King Salmon area because they were not in serviceable condition. Most vessel owners replaced the unserviceable suits with new ones to be in compliance, the Coast Guard said. In Western Alaska's cold, remote waters, immersion suits are critical to the crew's chances of surviving an abandon-ship scenario.

The pattern was not limited to shoreside inspections. On June 17, a boarding team from Coast Guard Cutter Mellon terminated the voyage of a fishing vessel for not having adequate immersion suits on board.

This news is a total 1527 time has been read
Tags: USCG: Positive Drug Tests On the Rise for Mariners in Western Alaska