Use of Lloyd’s Open Form contracts ‘at historic low’: ISU 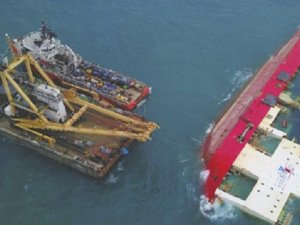 Latest International Salvage Union statistics for 2019 show that while ISU members’ business held up well in 2019, use of Lloyd’s Open Form (LOF) ‘no cure, no pay’ contracts dropped to an all-time low.

“The 2019 ISU statistics are broadly comparable with the previous year,” commented ISU president Richard Janssen. “Gross income has rallied somewhat but the numbers are still well below the levels of several years ago when annual income was typically more than $700m, driven by large-scale wreck removals.”

Of particular concern to the ISU is the continued decline in LOF cases, which accounted for 16% of all “dry” salvage (emergency response) cases and 27% or revenues last year. Average income per LOF case was $1.4m, or 10% of the salved value, compared to $723,000 per non-LOF contract.

“Use of LOF has been declining for a number of years,” an ISU spokesman told Seatrade Maritime News. “There used to be more than 100 per year now it seems to have settled in the range of 30 - 50 cases.

“There has been a perception among some insurers that LOF is expensive to use and the awards are too high,” he continued, and its decline is also put down to other factors “including improved ship to shore communications which mean that onshore offices can seek out alternative salvage assistance.

“There has also been some over-supply of salvage capacity which has led to contractors agreeing to work on commercial terms rather than LOF,” the spokesman added, but “that has changed recently with the loss of a number of players from the salvage sector over the past few years.”

The ISU would therefore like to see increased use of LOF, believing it provides the financial encouragement needed for salvors to take the risk of voluntarily assisting a casualty for an agreed share of any proceeds saved. This is turn will allow the salvage industry to maintain the equipment and skilled workforce necessary to react to vessels in distress, it says, and help save ships and their cargoes as well as prevent marine environmental disasters.

This news is a total 851 time has been read
Tags: SALVAGE , COLLISIONS , FINANCE & INSURANCE, SALVAGE