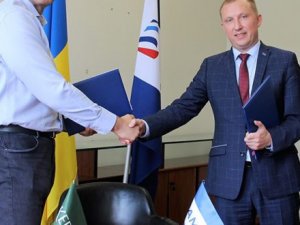 On September 5th, 2019 State Enterprise “Ukrainian Sea Ports Authority” and the Kernel Company signed an agreement on cooperation providing for investments in the development of the infrastructure in the port of Chornomorsk amounting to over UAH 3 billion

By the end of 2020, dredging near the four berths is expected to be carried out in the port and a new grain terminal to be built to increase transshipment volumes up to 6 million tons.

“The agreement between USPA and Kernel is a great example of public-private partnership representing one more step in the systemic development of the Chornomorsk port which is managed by USPA. This year we have completed a large-scale capital dredging project at the approach channel of the port and the area of ​​ 1st basinof Sukhyi Lyman and immediately proceed to ensure the necessary-to-business depths near berths No. 14–17. The Kernel Company, for its part, committed to guarantee the cargo flow volumes of at least 6 million tons per year. This will contribute to the quick payback of the USPA’s capital investments,” — USPA Head Mr. Raivis Veckagans said. He also added that the implementation of the project would help improve the conditions for exporting Ukrainian products, increase cargo transportation and create almost 250 new jobs in the port of Chornomorsk.

Mr. Yevgen Osypov, CEO of the Kernel Company, noted that agribusiness has been the engine of the Ukrainian economy. Since 2011 the agro-industrial complex has shown a steady increase in the volumes of agricultural deliveries to the world markets, which reached the 40% share in the structure of Ukrainian exports in 2018. Revenues from export operations generate foreign exchange earnings coming to Ukraine’s budget, contribute to GDP growth and ensure the country’s well-being.

“Our strategic goal for 2020 is to increase export of grains to 8.8 million tons by launching a new terminal at the port of Chornomorsk. That is why we are focused now on the Transgrainterminal construction. The next step is to concentrate on its effective loading. However, implementation of such large-scale investment projects is not possible without the state endorsement. Today, we feel the support from USPA, which helps achieve strategic goals to both the state and businesses by means of specific technical solutions, ” — Yevgen Osypov, CEO of the Kernel Company, commented on the signing of the agreement.

According to the document, by the end of 2020 USPA commits to reconstruct the operating water area of the 1st basin of the port’s Sukhyi Lyman (the 5th construction phase) to 15 metres and ensure dredging along the berthsNo. 14–17, where terminals of Kernel Holding S. A. have been operating. The depths of the operating area near the docks will be increased to 14–15 metres.

Kernel, in turn, undertakes to build a new grain terminal (Transgrainterminal LLC) at the port of Chornomorsk in 2019–2020. This will helpto ensure that the annual volumes of transshipment of agricultural products is at least 6 million tons of cargo, starting from 2021 to be increased up to 7 million tons in the future.

Investments to the public-private partnership project by USPA will amount to almost UAH 230 million with the cost of construction of the terminal by Kernel amounting to almost UAH 3 billion.

This news is a total 468 time has been read
Tags: USPA (UKRAINIAN SEA PORTS AUTHORITY)