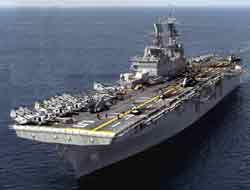 Ships of the Bataan Strike Group performed maritime security operations (MSO) Feb. 25 to March 1 in the U.S. Naval Forces Central Command's area of responsibility. MSO helps set the conditions for security and stability in the maritime environment, as well as complements the counter-terrorism and security efforts of regional nations. “Every ship in the Expeditionary Strike Group (ESG) is actively engaged in MSO,” said Cmdr. Timothy Spratto, Bataan Strike Group chief staff officer. “Our presence allows us to actively interact with merchant ships, fishing vessels and other legitimate maritime traffic in the area.”

These operations deny international terrorists use of the maritime environment as a venue for attack or to transport personnel, weapons or other material. “We’ll partner with regional allies or multinational coalition forces to supoort security in various regions,” said Cmdr. Jon Carriglitto, USS Bataan (LHD 5) operations officer. “People on the high seas see that piracy will not be tolerated.” Coalition forces conduct MSO under international maritime conventions to ensure security and safety in international waters so that all commercial shipping can operate freely while transiting the region. “We’re here to make sure the high seas stay free for everyone to use,” said Spratto.

This news is a total 553 time has been read