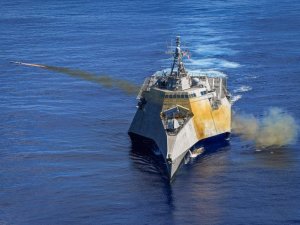 The event marks the first time an integrated NSM system is launched from a U.S. Navy LCS.

The NSM is a long-range, precision strike weapon that can find and destroy enemy ships at distances up to 100 nautical miles away. The stealthy missile flies at sea-skimming altitude, has terrain-following capability and uses an advanced seeker for precise targeting in challenging conditions.

The NSM aboard Gabrielle Giffords is fully operational and remains lethal. The weapon was first demonstrated on littoral combat ship USS Coronado in 2014. It meets and exceeds the U.S. Navy’s over-the-horizon requirements for survivability against high-end threats, demonstrated lethality, easy upgrades and long-range strike capability.

Gabrielle Giffords’ deployment represents a milestone for the U.S. Navy and LCS lethality, and marks the first time that an NSM has sailed into the Indo-Pacific region. The successful missile shoot demonstrates value for long-range anti-ship missiles.

Gabrielle Giffords, on its maiden deployment, arrived in the 7th Fleet area of responsibility Sept. 16, for a rotational deployment to the Indo-Pacific region.  This marks the first time two LCS have deployed to the Indo-Pacific region simultaneously.  Gabrielle Giffords is the fifth LCS to deploy to U.S. 7th Fleet, following USS Freedom (LCS 1), USS Fort Worth (LCS 3), USS Coronado (LCS 4) and the currently-deployed USS Montgomery (LCS 8).

NSM has an operational range of 185 Km (100 nautical miles) and a high subsonic speed. It uses Inertial, GPS and terrain-reference navigation and imaging infrared homing (with a target database aboard the missile).

The NSM is a fifth generation anti-sip missile, developed by KONGSBERG for the Norwegian Navy. NSM reached Initial Operational Capability on the new Norwegian Fridtjof Nansen-class frigates and the Norwegian Skjold Class corvettes in 2012. It is also fielded by the Polish Navy (coastal defense batteries) and has been selected by the navies of Malaysia and Germany. NSM was also selected in 2018 as the winner of the U.S. Navy Over-The-Horizon Weapon System (OTH WS) competition and by the USMC this year.