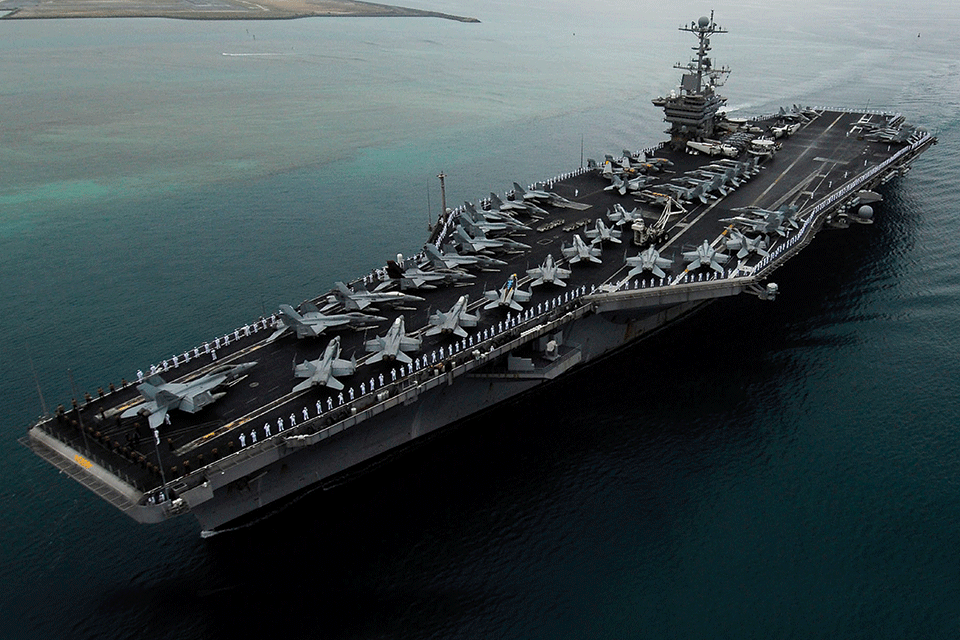 Aircraft carrier USS Harry S. Truman (CVN-75) is experiencing a malfunction of the ship’s electrical distribution system ahead of an expected deployment this fall, USNI News has learned.

Aircraft carrier USS Harry S. Truman (CVN-75) is experiencing a malfunction of the ship’s electrical distribution system ahead of an expected deployment this fall, USNI News has learned.

The carrier is supposed to go out for a second deployment, after operating in U.S. 6th Fleet and U.S. 2nd Fleet from April to December last year. In early July the Truman Carrier Strike Group began its Composite Training Unit Exercise (COMPTUEX) to re-certify as being ready to deploy. The predeployment training was, and the deployment was expected to be, overseen by 2nd Fleet for the first time since it was reestablished and reached initial operational capability this spring.

“USS Harry S. Truman (CVN 75) has experienced an electrical malfunction within the ship’s electrical distribution system requiring analysis and repair. The ship is working closely with technicians from Norfolk Naval Shipyard to determine the cause and scope of the issue. The safety of the ship’s crew and reactor plants are not affected,” U.S. Fleet Forces Command spokesman Capt. Scott Miller told USNI News Friday night.

USNI News understands a similar announcement went out to lawmakers on Friday evening.

A source told USNI News that it is too early to understand what this electrical malfunction means for the upcoming deployment plans.

Miller said, “it is Navy policy to not disclose future operations.”

The only other deployable aircraft carrier on the East Coast is USS Dwight D. Eisenhower (CVN-69), which, after going through a difficult 18-month maintenance period, is now in the basic phase of training. The carrier strike group, given the timing of beginning the basic phase, would likely not be ready to deploy until the end of this calendar year or early 2020.

The Truman challenges highlight the fragility of the East Coast carrier fleet. With six carriers based in Norfolk, Va., now, only Truman and Eisenhower were deployable – and now IKE will be the only one unless Truman can be fixed quickly. It does not appear the situation will improve in 2020, either.

Unavailable for routine deployments is USS John C. Stennis (CVN-74), which wrapped up a deployment from October to May during which it also shifted homeports from Bremerton, Wash., to Naval Station Norfolk. Stennis is next in line for a mid-life refueling and complex overhaul (RCOH), which is set to begin in late 2021. The carrier has already begun some early preparations for the RCOH with personnel from the Newport News Shipbuilding yard nearby, and it will continue conducting local operations and assisting in activities such as carrier landing qualifications for new pilots until it moves from Norfolk to Newport News in early 2021.

USS George Washington (CVN-73) is about halfway through its own RCOH at Newport News, with an expected finish date of late 2021. Also at Newport News is USS Gerald R. Ford (CVN-78), which is in a post-shakedown availability that has been extended several times, as the shipbuilder and Navy try to address remaining issues – chiefly related to the advanced weapons elevators and the nuclear propulsion system – before the carrier can fully enter the fleet and begin working towards its maiden deployment. The PSA is currently set to end in October, but the Navy has said the elevators won’t be completely fixed and certified by then.

And nearby at the Norfolk Naval Shipyard, USS George H.W. Bush (CVN-77) on Feb. 21 entered a maintenance availability that typically would have been scheduled for 10 and a half months but instead will span 28 due to the shipyard’s backlog of work and inability to get the carrier maintenance done faster, Rep. Elaine Luria (D-Va.) told USNI News in an interview earlier this year.

It is unclear at this time how severe the electrical issues on Truman are. If the ship can be fixed soon enough, the carrier could potentially still deploy during this deployment cycle, before the carrier and its escorts are scheduled to go into maintenance periods. If Truman cannot be fixed to support a deployment this cycle, the East Coast would just have the upcoming Eisenhower deployment. It’s unclear what could come next.

USS Abraham Lincoln (CVN-72) is the only aircraft carrier deployed. The Lincoln Carrier Strike Group departed the East Coast on April 1 and is currently in the North Arabian Sea. The CSG has remained in the Middle East since tensions arose this spring, as Iranian forces threatened U.S. and international warships, commercial ships and unmanned aircraft. Lincoln is shifting homeports and will be based out of San Diego when the deployment ends.

It is too soon to know if the Lincoln strike group’s deployment plans will be affected by Truman‘s challenges.

For years, as the Navy supported the height of operations in Afghanistan and Iraq, the sea service always maintained at least one carrier in the Middle East and at least two globally, creating a strain on the jets and the carriers that wasn’t fully realized until recent years. The Navy is trying to focus on rebuilding readiness for both ships and aircraft, though backlogs of work at the public shipyards that repair carriers and submarines has hindered the readiness recovery effort.