USS Kidd Arrives in Washington Flying a Pirate Flag. Here’s Why It’s Authorized to Actually Do That 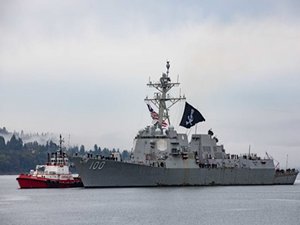 The arrival of the U.S. Navy’s guided-missile destroyer USS Kidd at its homeport in Everett, Washington this week drew quite a bit of attention online, but it wasn’t because of the millions worth of drugs it had seized during its counter-narcotics deploym

Instead, it was the giant “Jolly Roger” pirate flag it was flying from its mast.

The USS Kidd (DDG-100) arrived at Naval Station Everett on September 21 following its deployment to the U.S. 4th Fleet area of operations for enhanced counter-narcotics operations missions in the Caribbean Sea and eastern Pacific Ocean.

During their deployment, Kidd’s sailors aided in the recovery of 805 kilograms of suspected cocaine worth over an estimated wholesale value of $30 million; rendered assistance to a fishing vessel in distress, towing the vessel over 200 nautical miles to safety; battled a bout of COVID-19; and participated in a passing exercise (PASSEX) with the El Salvadoran navy.

So why the skull and crossbones?

The story actually dates back to the first voyage of the original vessel to bear the Kidd name, USS KIDD DD-661, Fletcher-class destroyers launched in 1943 by the Federal Shipbuilding & Dry-dock Company in Kearny, New Jersey.

USS KIDD (DD-661) was named after Rear Admiral Isaac Campbell Kidd, Sr., a Medal of Honor recipient who was killed aboard the USS Arizona during the attack on Pearl Harbor. His widow, Mrs. Inez Kidd, served as the ship’s sponsor. So, as the story goes…

The KIDD’s first voyage was one of some notoriety. Under the command of Cdr. Allan B. Roby, the destroyer moved across New York Harbor for delivery to the Brooklyn Naval Shipyards . . . flying the skull and crossbones of the Jolly Roger high from the foremast. The edition of TIME magazine that week carried a photo of KIDD, announcing that it had been one hundred years since the Jolly Roger had flown in New York Harbor. The crew quickly adopted the pirate Captain Kidd—who ironically hailed from New York—as their mascot and hired a local cartoonist to paint the famed buccaneer’s image high of the forward smokestack. Not wishing to dishonor RADM Kidd, however, the crew obtained permission from Mrs. Kidd first. The Admiral’s nickname at the Naval Academy had been “Cap” (as in “Captain Kidd”) and he had gone by this nickname his entire life. So on the crew’s behalf, Mrs. Kidd obtained official permission from the powers-that-be in the Navy for them to paint the pirate on the stack and fly the Jolly Roger. The KIDD would become the only vessel in the history of the United States Navy to ever have such leave granted to fly the flag of piracy.

The tradition has since been extended to the two other Navy destroyer’s named in honor of RADM Kidd, including the USS Kidd (DDG-993) and USS Kidd (DDG-100).

This news is a total 2092 time has been read
Tags: USS Kidd