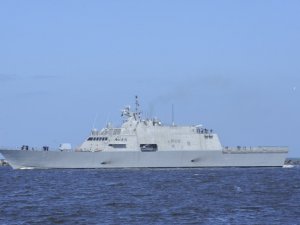 Milwaukee left the Joint Expeditionary Base Little Creek in Norfolk, Virginia on February 17th after having completed initial engineering repairs on her propulsion system.

An investigation has been ongoing since Milwaukee experienced a loss of propulsion while underway off the coast of Virginia in December. The ship, only recently commissioned in November, was en-route to the naval base in Little Creek when it lost propulsion, requiring that ship be towed the rest of the way to port. A statement from the U.S. Navy at the time blamed the incident on metallic debris contamination in the port and starboard combining gear filter systems.

The Navy said this week that the current focus of the ongoing investigation indicates a likely failure of an emergency stop event in response to a loss of fuel pressure to both the port and starboard gas turbine engines that occurred while operating in combined diesel and gas turbine (CODAG) mode.

Though Milwaukee is a San Diego-based ship, she is currently manned with a Mayport-based team. After successful completion of required certifications, they executed a crew swap late last year at Joint Expeditionary Base Little Creek-Fort Story.

“Crew 108 Sailors are thrilled to finally arrive in our new homeport and reunite with our families,” said Cmdr. Kevin Ralston, Milwaukee’s commanding officer. “It’s been a long journey to get here, but I couldn’t be happier with my crew’s performance and their efforts to get Milwaukee ready for sea.”

While at the BAE shipyard, the vessel will take on equipment for underway testing this spring, before eventually arriving in her San Diego homeport.

Mayport is scheduled to be the home of eight Freedom-variant littoral combat ships and 12 LCS crews, starting with USS Little Rock

This news is a total 2311 time has been read
Tags: USS, Milwaukee, arrives, at, BAE, shipyard, in, mayport, Turkish, Maritime