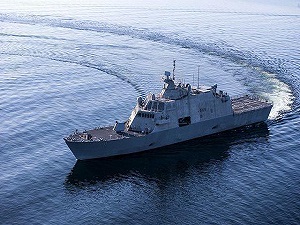 Future USS Sioux City will become the first US Navy ship ever to be commissioned at the United States Naval Academy in Annapolis, Maryland, as she enters service in a ceremony on Saturday, November 17.

The Freedom-variant littoral combat ship (LCS) is also the first naval vessel to be named in honor of Sioux City, Iowa.

US Senator Joni Ernst of Iowa will deliver the commissioning ceremony’s principal address. Mary Winnefeld, the wife of former vice chairman of the Joint Chiefs of Staff, retired Adm. James “Sandy” Winnefeld, is the ship’s sponsor. The ceremony will be highlighted by a time-honored Navy tradition when Mrs. Winnefeld gives the first order to “man our ship and bring her to life!”

“This ship is named in honor of Sioux City, Iowa, but represents more than one city,” said Secretary of the Navy Richard V. Spencer. “USS Sioux City represents an investment in readiness and lethality, and is a testament to the increased capabilities made possible by a true partnership between the Department of the Navy and our industrial base.”

The future USS Sioux City, designated LCS 11, is the 13th LCS to enter the fleet and the sixth of the Freedom-variant design. USS Sioux City will be homeported at Naval Station Mayport, Florida.

This news is a total 3503 time has been read
Tags: uss sioux city, us navy, us naval academy, iowa, richard v. spencer