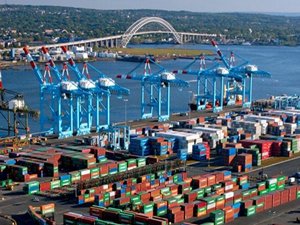 Disciplined supply-side management by shipping lines, as the industry moves into one of the most critical high seasons between China and the US in living memory, has pushed spot rates further into uncharted waters.

Rates between China and US West Coast (FBX01 Daily) reached USD$3,058/FEU, up 11% on last week’s previous all-time high, according to the latest numbers posted by Freightos Baltic Index.

Last-minute shippers looking to send goods via the Panama Canal direct to US East Coast ports were similarly squeezed. Spot rates on the FBX03 Daily index edged upwards 3% to US$3,466/FEU in the same period.

Both shipping lanes are trading at a healthy premium to the same time last year, with Freightos posting a year-on-year improvement of 110% and 30% respectively.

The rate rises come despite lines bringing capacity back online to cater to the high season spike in demand.

Figures from Alphaliner pointed to the return of 350,000TEU of capacity to the fleet over the last two weeks, leaving the total idle fleet at 264 vessels, or 1.2 million TEU (5.1% of the global fleet). This remains the highest percentage of the global fleet laying idle during a peak season since 2009 in the aftermath of the financial crisis.

This important industry metric peaked at 2.72 million TEU (11.7% of the global fleet) at the end of May when FBX spot rates were languishing at 50% of today’s record levels.

“Even with capacity at its highest level since January (though the percentage of cancelled sailings is still high for peak season), this year's early peak season volumes are keeping US-bound ships from China full and rates up,” says Freightos chief marketing officer, Eytan Buchman.

With supply remaining tight on trade lanes to both the east and west coast, the differential between a 40ft container to New York and Los Angeles was at its lowest level since the index launched.

“It (the differential) is usually about US$1,200 or 42% more expensive to ship on the longer voyage to eastern ports. But since the rebound in volumes in June, that gap has closed by half,” says Buchman. “This week East and West Coast rates were separated by only US$408 or 12% - an all-time FBX low.”

This news is a total 2818 time has been read
Tags: Freightos Baltic Index (FBX)