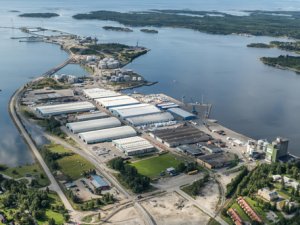 Finland’s Port of Vaasa and Sweden’s Port of Umeå merged their operations under the new company, Kvarkenhamnar AB. The company will be marketed under the name, Kvarken Ports Ltd.

Kvarken Ports will be owned jointly by the city of Vaasa and Umeå Kommunföretag AB. The current port staff in Umeå and Vaasa Port, approximately 30 individuals, will be transferred to the new company.

Umeå Hamn AB will remain, but will have a new role and will remain only as owner of the port’s permanent facilities, docks, railway tracks, etc. and will become a subsidiary to the municipal company INAB – Infrastruktur i Umeå AB after the end of the year. The city of Vaasa will own the facilities in Vaasa Port.

”I am looking forward to starting Kvarken Ports,” said Matti Esko, President of the company. ‘‘We will be embarking on a whole new era in logistics cooperation in the Kvarken region by offering a joint venture that will support the increasing cargo and passenger volumes in the Vaasa and Umeå region. Our aim is to continuously develop the port facilities, improve our services and strengthen our cooperation with all logistics stakeholders in the Kvarken region.”
Umeå and Vaasa have a longstanding tradition of collaboration across the Kvarken archipelago and these relations resulted in the purchase of a new ferry in 2012, in the jointly owned company, NLC Ferry AB/Oy.