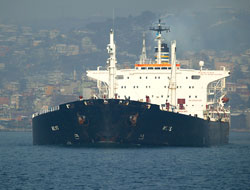 On one side there is dry bulk with its massive ups and downs, now resting near all-time lows, without any ?desire? to pick up.

On one side there is dry bulk with its massive ups and downs, now resting near all-time lows, without any ?desire? to pick up.

It seems as if shipping is divided in two separate camps these days. On one side there is dry bulk with its massive ups and downs, now resting near all-time lows, without any ?desire? to pick up. The Baltic Dry Index (BDI) began 2009 almost without any turbulences, staying put at 772 points, dropping by one point in the last couple of sessions. On the other side, there is the tanker market, which resurged from its ashes during 2008, managing to post average rates of near records. According to a report compiled by Allied & Shipbroking ship owners of Suezmaxes managed to earn an average daily rate of $67,200, while those with Aframaxes earned a daily average of $49,800, higher than ever before Similarly, VLCCs ended the year with an average daily charter rate of $88,400, which is almost at the record levels of 2004, when each of these sea ?giants? topped daily averages of $88,700, according to R.S. Platou Economic Research. Despite these positive news, the stock values of NY-listed tanker companies, like Tsakos Energy Navigation and Omega Navigation, took some heavy beating from September onwards, when stock markets around the world dived. Investors were influenced by the sharp decline of the dry bulk market, while many succumbed to the negative sentiment created by the credit crisis and lately the economy"s recession.

Of course, all is not well for the tanker industry is set for a challenging year, mainly due to recession setting in around the globe. Already, there are reports of oil majors reducing production rises, while crude demand is also expected to fall. OPEC"s determination to control prices and help their restoration to higher levels has already reduced the number of cargoes flowing from the Middle East, especially as the recent record cut is expected from this month onwards. But, the most crucial factor as to where tanker rates will settle is tonnage availability. If it remains at reasonable levels there"s a good chance that the market will keep its positive outlook, producing healthy rates for ship owners.

This news is a total 9774 time has been read