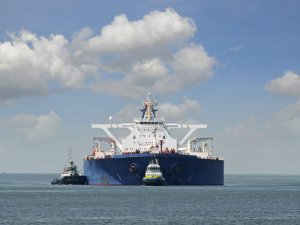 As of June 6, more than 80 tankers were waiting in Venezuelan waters, half of them to load crude and refined products for exports, according to the data.

Venezuela is nearly a month behind in shipping crude to customers from its main oil export port, according to Reuters data, as chronic delays are compounding production declines and could breach state-run PDVSA’s crude supply contracts if they are not quickly cleared.

The oil company in recent days has raised the prospect that deliveries could be interrupted to some of the world’s largest refiners if it fails to end a tanker bottleneck contributing to a sharp decline in oil exports, the lifeblood of the OPEC-member nation. Tankers waiting to load more than 24 million barrels of crude, almost as much as PDVSA shipped in April, are sitting off the country’s main oil port, according to the data. The backlog is so severe, the company has told some customers it may declare force majeure, allowing it to temporarily halt contracts, if they do not accept new delivery terms.

As of June 6, more than 80 tankers were waiting in Venezuelan waters, half of them to load crude and refined products for exports, according to the data.

The delays have mounted since May, when asset seizures forced PDVSA to stop using Caribbean facilities for storing and loading export cargoes. But PDVSA’s non-compliance with oil supply contracts started months ago as production declines accelerated, according to internal company documents.

In April, PDVSA shipped 1.49 million barrels per day (bpd) of crude and fuels to its customers, 665,000 bpd below the 2.15 million contracted, according to the documents.

In 2017 PDVSA lost two supply contracts, one with U.S. PBF Energy and one with Brazil Braskem, due to unstable supply and U.S. sanctions. Since then, delays fulfilling supply contracts have only grown.

PDVSA customers including Chevron declined to comment on the new terms. Nayara Energy, Valero Energy and units of CNPC, which each had vessels awaiting loadings on Wednesday, did not reply to a request for comment.

PDVSA did not reply to a request for comment.

One condition PDVSA is trying to impose to avoid breaching contracts is for customers to agree to load cargoes in ship-to-ship operations off the nation’s western coast to ease congestion at its Jose port. The company expects the new terms would end the backlog there and at its Paraguana Refining Center, according to a person familiar with the matter.

It was unclear who would pay for the ship-to-ship transfers.

One buyer said chances are slim that any customer would contest any force majeure, choosing instead to negotiate differences in pricing because of the transfer costs involved.

Venezuela’s crude exports fell 6 percent in May to 1.168 million bpd following U.S. ConocoPhillips’ legal actions to seize PDVSA’s assets in four Caribbean islands, according to the data. The nation’s crude exports in the first five months of 2018 were 27 percent lower than in the same period of 2017.

The lack of export and storage terminals, especially those with deep-water docks to load large vessels bound for Asia, has forced PDVSA to divert tankers to Venezuela in recent weeks. The measure also has been taken to avoid further cargo seizures, after Conoco won temporary court orders retaining two vessels near Aruba last month.

The company’s proposed ship-to-ship (STS) transfer solution, to be performed in waters 6 miles from Venezuela’s Cardon refinery, faces resistance among oil buyers, according to shippers and traders.

These transfers require specialized equipment, handling by specialists and facilitated by mooring masters, according to a provider of the service. The captain of the receiving tanker also has to be trained to perform the operation, a shipper said.

“A STS operation adds at least $1 per barrel to the purchase cost. The question is who will take responsibility for that,” said Robert Campbell, head of oil products markets at consultancy Energy Aspects.

The price of Venezuela’s Merey crude, the main grade exported from Jose port, rose to $60.24 per barrel in April.

Insurance coverage for tankers and cargoes would also have to be changed to include the STS operation if customers accept the option, Campbell added.

Crude spills affecting the waters surrounding several PDVSA’s ports at Venezuela’s western coast is another risk some customers see as an obstacle for the transfers.

This news is a total 725 time has been read
Tags: Venezuela Faces Hurdles Clearing 24 Million Barrel Backlog at Ports