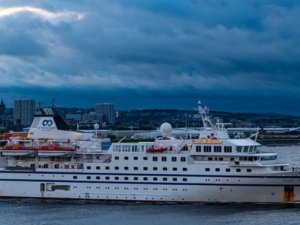 The incident occurred in the early morning hours (local time) of March 30, 2020.

“(T)he cruise vessel RCGS Resolute has been subject to an act of aggression by the Venezuelan Navy in international waters, around 13.3 nautical miles from Isla de Tortuga with 32 crew member and no passengers on board,” Hamburg-based ship manager Columbia Cruise Services said.

As explained, the Portugal-flagged cruise ship had been drifting for one day off the coast of the island to conduct some routine engine maintenance on its idle voyage to Willemstad/ Curaçao.

“Shortly after mid-night, the cruise vessel was approached by an armed Venezuelan Navy vessel, which via radio questioning the intentions of the RCGS Resolute’s presence and gave the order to follow to Puerto Moreno on Isla De Margarita.”

“While the Master was in contact with the head office, gun shots were fired and, shortly thereafter, the navy vessel approached the starboard side at speed with an angle of 135° and purposely collided with the RCGS Resolute,” Columbia Cruise Services further said.

“The navy vessel continued to ram the starboard bow in an apparent attempt to turn the ship’s head towards Venezuelan territorial waters.”

The ice-strengthened expedition vessel sustained only minor damages not affecting its seaworthiness. However, the patrol boat Naiguata (GC-23) was severely damaged and started to take on water.

Columbia Cruise Services said that the 8,300-ton cruise ship remained in the vicinity of the scene for more than one hour and reached out to the Maritime Rescue Coordination Centre (MRCC) Curaçao. All attempts to contact those on board the navy ship were reportedly unanswered. After receiving the order to resume passage, Resolute continued sailing towards its destination at Curaçao.

A full investigation into the circumstances surrounding the incident will now be carried out, the company added.

In a separate statement, the Venezuelan government claimed that the incident took place in the country’s territorial waters, near the La Tortuga Island, and that the cruise ship entered Venezuela’s jurisdictional waters illegally.

The government also suggested that the cruise ship may have carrying mercenaries that intended “to attack military bases in Venezuela.”

“Being escorted, it (the cruise ship) decided to ram the Bolivarian navy ship, which caused its sinking,” Defense Minister Vladimir Padrino López noted.

The country’s defense ministry accused Resolute of a “cowardly and criminal” action as the ship “did not attend to the rescue of the crew.”

Eventually, all personnel was successfully rescued from the sinking patrol boat, the ministry informed.