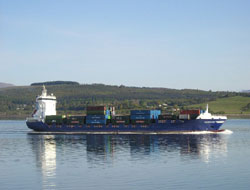 Orient Steamship has had its last remaining vessel detained for nearly a month at Glasgow for port state control deficiencies.

Last Orient vessel is still under arrest in Glasgow

The 1986-built, 146,351 dwt capesize Silver Constellation was held on November 7 after being targeted by the Maritime and Coastguard Agency for a mandatory expanded port state control inspection at Hunterston, part of the Clydeport complex, where it discharged a cargo of coal.

Agency spokesman Mark Clark said the surveyor found such a large number of deficiencies that the inspection was abandoned and the Marshall Islands-registered vessel detained.

The ship was in a pretty poor state

The flag state and the classification society were asked to attend the vessel in a notification issued to the master of the ship by the MCA.

?The ship was in a pretty poor state,? Mr Clark told.

The ship was moved to a deepwater anchorage at Hunterston, where it has remained while the deficiencies were rectified.

The detention came almost two months after an inspection by port state control in Rotterdam on September 16 found a raft of problems, although the ship was not held. The deficiencies included missing lifebuoys, insufficient and improperly maintained lifeboats, unsafe gas instruments and insufficient emergency lighting, batteries and switches.

John Ramage, from the London office of International Registries, which administers the Marshall Islands flag, said representatives from the flag state had visited the ship a ?couple of times?, most recently last Friday.

He said IRI was working with the owner and class society Det Norske Veritas to resolve the outstanding issues.

The vessel is managed by Orient Steamship

The vessel, which is managed by Orient Steamship (Canada) in Vancouver, was previously the Orient Brilliance and was the second of five ships acquired by Mr Koo after he left his father"s shipping company, Valles Steamship, in 2002.

The other four have been either sold or returned to their original owner. They included the capesize bulk carrier Orient Alliance, which was sold to Goldenport Holdings after being arrested in May 2006 for alleged non-payment of bills.

The 1983-built, 82,201 dwt combination carrier Orient Eternity was repossessed by Greek owner Oceanbulk Maritime after it had its class suspended by Lloyd"s Register in mid-voyage in September 2006, after key annual, intermediate and docking surveys became overdue.

Orient Steamship was acquiring the vessel on bareboat hire-purchase from Oceanbulk, which said the class suspension meant the vessel was not being properly maintained.

There was a bitter dispute between the two companies while Oceanbulk tried to regain control of the ship.