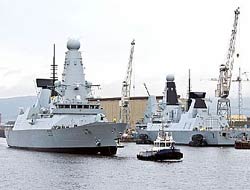 Dauntless, the second of the Royal Navy's new powerful Type 45 destroyers, returned to her home on the Clyde.

Dauntless, the second of the Royal Navy's new powerful Type 45 destroyers, returned to her home on the Clyde.

Dauntless, the second of the Royal Navy's new powerful Type 45 destroyers, returned to her home on the Clyde just before Christmas 2008, after successfully completing her first set of sea trials. During the four-week period of the trials, the 7,350 tonne vessel was put through her paces during blustery and wintry conditions, which provided a rigorous environment for testing her power and propulsion and Combat System.

The sea trials, conducted by prime contractor BVT, together with the MOD, Royal Navy and other industry partners have allowed her to demonstrate her speed and manoeuvrability, and she performed so well that the crew was also able to complete additional Combat System trials.

"The successful completion of HMS Dauntless' first set of sea trials ends 2008 with a particularly hectic period of activity for the Type 45 programme on the Clyde. In the last four months the first Type 45, HMS Daring, has completed her final set of Industry-led sea trials and has been Accepted off Contract.

"The fourth Type 45, HMS Dragon, has been launched and now HMS Dauntless has completed a very successful set of initial sea trials. This year has witnessed the Joint Industry/MOD team delivering unprecedented success on a major warship programme. "This is down to the hard work, dedication and innovation of the joint MOD, RN and Industry team closely working together at all levels to overcome problems and achieve a common goal."

BVT's Type 45 Programme Director, Angus Holt, added: "The Type 45 programme has already achieved one major milestone this week, but to achieve another in less than 48 hours is unprecedented. "This is a great achievement and I am delighted that HMS Dauntless' trials have been such a great success. "The team work between BVT, MOD, Royal Navy and sub-contractors has ensured that despite the many challenges set, she has returned to Scotstoun on schedule, with all trials achieved."

HMS Dauntless is in very good shape and ready to commence preparations for her second set of sea trials, due in July 2009, which will focus on Combat System testing and Acceptance activity.

Dauntless was launched in January 2007 at the Govan shipyard.

Dragon, the fourth Type 45 was launched on the Clyde on 17 November 2008 and Daring, the first ship in the Type 45 programme, was officially Accepted Off Contract by MOD from BVT on 10 December 2008 and has commenced 12 months of MOD-controlled (Stage 2) trials and integration activity.

The Type 45 has twice the range (in distanced steamed) than the current class of Royal Navy destroyers, the Type 42. Her 152-metre length is equivalent to more than 16 double-decker buses lined up end-to-end and she is as high as an electricity pylon.

Her onboard power plant can supply enough electricity to light a town of 80,000 people.

Her fuel tanks have a volume equivalent to approximately half that of an Olympic swimming pool.
The hull structure is made of 2,800 tonnes of steel which is more than the weight of the Blackpool Tower.

This news is a total 634 time has been read