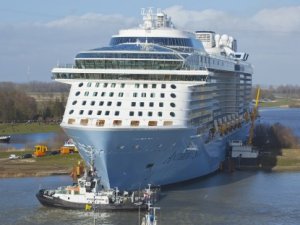 The river passage started in Papenburg on Tuesday, March 10 at about 14.30 pm. At around 3.15 am yesterday the ship passed the river Ems barrier in Gandersum.

In the morning the Quantum-class ship reached the Dutch harbour of Eemshaven where the it will berthed for a few days to bunker fuel, the shipbuilder said.

The ship is scheduled to leave Eemshaven on Sunday evening and proceed to its sea trials in the North Sea.

Later on, the ship is scheduled to berth in Bremerhaven before she is handed over to Royal Caribbean International in the mid of April.

Once it has commences service, the Anthem of the Seas will sail with its 4,100 passengers from Southampton (England) to Norway and the Mediterranean, before making its way from Fort Lauderdale (Florida) to the Caribbean in winter 2015.

This news is a total 5879 time has been read