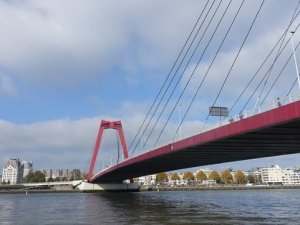 An inland container barge allided with the center span of the iconic Willemsbrug bridge east of the port of Rotterdam on Wednesday. Three containers went into the water, according to local media.

According to local outlet Rijinmond, no one was injured in the collision, and all of the boxes have since been recovered. The Willemsbrug bridge was closed to traffic while engineers evaluated it for any potential damage, but has since been reopened. The cause of the incident is under investigation.

The vessel involved in the allision is believed to be the inland freighter Rhenus Duisburg.

Ron Teuben, an inland barge captain for a different vessel, told Radio Rijnmond that the incident was likely the result of a miscalculation prior to loading. The air draft calculation depends upon the tide, bridge height, draft and other factors that may influence clearance. Teuben estimated that the container stack was roughly in the range of half a meter too high for the bridge at the time of the allision.

The accident coincides with the anniversary of the bridge's opening on July 1, 1981.

This news is a total 1789 time has been read
Tags: Video: Container Barge Strikes Bridge in Rotterdam

Environmental Disaster Feared from X-Press Pearl SinkingContaminants released from the wreckage of a container ship off the coast of Sri Lanka could be dragged thousands of kilometers by ocean currents, impacting wildlife and humans in far-reaching latitudes. Salvors Prepping to Raise SEACOR Power in Gulf of MexicoThe Coast Guard reported Friday that a salvage crane was working to remove debris from the site while divers were prepping lift boat to be raised. Charred remains of the X-Press Pearl sinking off ColomboWith white smoke still billowing from its foredeck, the 2,700 teu X-Press Pearl, not yet four months old, started to sink today in waters off Sri Lanka’s west coast.