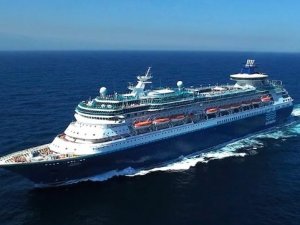 A startling and saddening video for many emerged today on social media showing the last moment of the cruise ship known as the Monarch, which had once been part of the pioneering Sovereign class built by Royal Caribbean International nearly 30 years ago.

In the video you get to stand on the bridge and hear the commands as the once pioneering cruise ship is run into the mud at Aliaga, Turkey in preparation for her scrapping. Then it switches to a shore view as the 74,000 gross ton cruise ship ends its career.

Events in the Monarch’s carrier moved quickly in the last few weeks. On June 22, Pullmantur Cruises which had been operating the cruise ship since 2013 announced that it had filed for reorganization under Spain’s insolvency laws. The Monarch at the time was in Naples, Italy where it was reported that she was already being stripped of her valuable fittings. Royal Caribbean Group, which was an investor in Pullmantur, took control of the ships. Last week the Monarch arrived in Turkey and today, July 22, she was beached officially ending her career. It will take a few months for the ship to be fully stripped of its furnishings and dismantled.

Built at the famed Chantiers de l'Atlantique shipyard in Saint Nazaire, France, and introduced in 1991 as the Monarch of the Seas, she at the time was one of the largest cruise ships in the world and part of ambitious growth plans for Royal Caribbean International. Able to carry over 2,700 passengers, she began her career sailing 7-day cruises in the Caribbean but later as the company grew shifted to several other markets including operating short cruises to the Bahamas.

In December 1998, the Monarch of the Seas suffered a severe grounding departing the Caribbean island of St. Maarten. With a more than 130-gash in her hull, the captain made the quick decision to ground the ship on a sandbar. Her passengers and crew were evacuated. Repairs took more than three months to complete.

With her name shortened to Monarch, the ship started sailing for Pullmantur in 2013 and remained active cruising in the Caribbean when service was suspended in March 2020 due to the global pandemic. She had been scheduled to cruise in Northern Europe during the summer of 2020.

The Monarch’s sister ship the Sovereign also arrived this week in the waters off Turkey and will likely soon follow her sister into the hands of the scrappers.

This news is a total 3528 time has been read
Tags: Famed Cruise Ship Monarch Beached for Scrapping