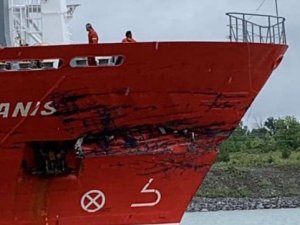 Footage from the scene does not appear to show early action on the part of either ship to alter course. The two vessels struck each other slightly to starboard of the centerline, video from the scene shows, in a departure from the normal port-to-port passing arrangement. An alarm tone may be heard at regular intervals in the background both before and after the collision - but not a horn.

The ships involved were the tweendeck heavy lift ship Alanis, which was laden with wind tower components and bound for Duluth, and the Canadian-flagged freighter Florence Spirit, which was carrying a load of coal to Quebec.

The casualty occurred at about 1600 hours at a position south of Port Robinson, Ontario, a St. Lawrence Seaway Management Corporation spokesman told local media. The seaway authority is currently investigating the circumstances of the accident in partnership with Transport Canada.

Both vessels have returned safely to port for examination. No injuries or pollution have been reported, and there was no interruption to marine traffic on the canal.

This news is a total 1906 time has been read
Tags: Two Cargo Ships in Head-On Collision on Welland Canal