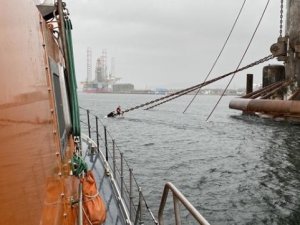 On Friday evening, the Invergordon RNLI lifeboat rescued two friends who were stranded on the anchor chain of a cold-stacked oil rig in Cromarty Firth, Scotland.

The two set off from Invergordon for an open-water swimming workout, with one of them in a kayak to provide safety coverage for the swimmer. However, they were caught in a strong ebbing tidal current and found themselves in difficulty. With the moored rig Well Safe Guardian fast approaching, the two friends made an attempt to catch and hold onto the anchor chain. They scrambled up the chain, and they were quickly spotted by crew of the rig, who raised the alarm. The kayak drifted away in the current.

The RNLI volunteer crew's pagers sounded at 1800 hours with a request from the coast guard coordination center in Aberdeen. The lifeboat Douglas Aikman Smith responded quickly to the scene, and her crew decided to launch the all-weather lifeboat’s small inflatable to get in close and carry the two men to safety. Once they were on board, the lifeboat crew assessed the friends' condition and found them in good shape, if a little cold.

Meanwhile, the HM Coastguard helicopter Rescue 151 located the kayak further up the firth and marked it for the crew to recover. Once the two men were safely ashore, the lifeboat located and recovered the kayak to be reunited with the owner.

"This evening’s call-out shows the importance [of] prior planning, in respect of weather conditions, tide and means to communicate if difficulty occurs, and keep it within reach," said Michael MacDonald, an RNLI volunteer press officer and a crewmember for Invergordon’s RNLI lifeboat.

This news is a total 1274 time has been read
Tags: Video: Two Swimmers Found Clinging to Oil Rig's Anchor Chain