Viking Sky Near Grounding the Result of Low Lubricating Oil 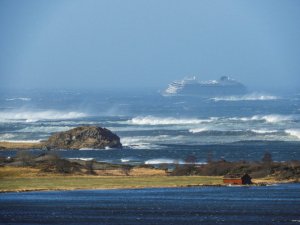 The Accident Investigation Board of Norway has published an interim report on its investigation into the Viking Sky’s loss power and near-grounding in heavy weather off the coast of Norway last March.

The Viking Ocean Cruises cruise ship had 915 passengers and 458 crew on board when it experienced a blackout and loss of propulsion in forecasted gale to storm force conditions off the notoriously dangerous Hustadvika coast in western Norway on March 23, 2019.

The master immediately sent out a mayday as the ship drifted towards shore.

The interim report includes a simplified narrative and initial findings from the incident, as well as actions taken by Wilhelmsen Ship Management, which provided technical management of the vessel.

According to the interim report, the Viking Sky’s diesel generators shut down as the result low lubricating oil pressure, combined with pitching and rolling.

“On the morning of 23 March, between 0500 and 0904, 18 lubricating oil low level and low volume alarms were registered by the operational DGs. Each alarm, having been accepted, cleared within a few seconds,” the interim report states.

The report also highlights the crew’s efforts to prevent the ship from running aground.

“Having assessed the situation, the master broadcast a mayday at 1400. He then instructed the crew to drop both anchors. However, the anchors did not hold, and the ship continued to drift astern towards the shore at a speed of 6–7 knots. The General Alarm was activated at 1413 and the passengers and crew began to muster,” the interim report states.

The AIBN estimates the Viking Sky came within a ship’s length of grounding, having passed over or in immediate proximity to 10 meters shoals before propulsion was restored.

This news is a total 190 time has been read
Tags: Viking Sky , Low Lubricating Oil