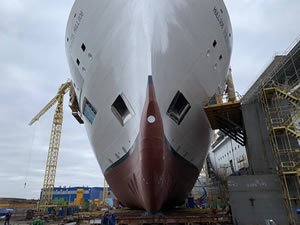 Viking’s first expedition ship, Viking Octantis, was floated out by Norwegian shipbuilder Vard on 22 December, marking a major construction milestone denoting that the ship will now move into its final stage of construction.

Following the float out, the 378-guest newbuild was then moved to a nearby outfitting dock for further construction and interior build-out. After final outfitting, Viking Octantis will be delivered at Fincantieri’s Vard shipyard in Søviknes, Norway. Both Vard shipyards in Tulcea, Romania, and in Søviknes are in charge of this ship project.

Scheduled to debut in early 2022, the 30,150 GT Viking Octantis will spend its maiden season sailing voyages to Antarctica and North America’s Great Lakes.

A second, identical expedition ship, Viking Polaris, is set to debut in summer 2022 and will sail journeys to Antarctica and the Arctic.

“We are pleased to continue our partnership with Fincantieri’s VARD and celebrate this important milestone in the construction of our first expedition vessel,” Torstein Hagen, Chairman of Viking, commented.

“In creating ‘the thinking person’s expedition,’ we are perfecting polar expedition cruising, and we will usher in a new era of comfortable exploration in the heart of North America. Viking Octantis and her sister ship, Viking Polaris, will allow our guests to explore further – to the ends of the earth as well as closer to home.”

According to Viking, the ships are optimally sized and built for expeditions – small enough to navigate remote polar regions and the St. Lawrence River, while large enough to provide stability in the roughest seas.

Specifically, straight bows, longer hulls and fin stabilizers will allow the ships to glide over the waves for the calmest possible journey; ice-strengthened Polar Class 6 hulls will provide a safe way to explore; and U-tank stabilizers will significantly decrease rolling by up to 50 percent when the ships are stationary.

This news is a total 4817 time has been read
Tags: Expedition Ships , Vard , viking