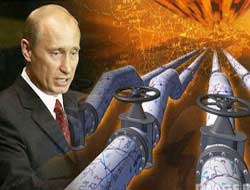 "You know that I have signed a decree forming a new company on the basis of the two existing ones -- Sovcomflot and Novoship," Putin was quoted by RIA Novosti news agency as telling Sovcomflot's Director General Sergei Frank.

Russia has been seeking to merge Sovcomflot and Novoship for several years, in line with the Kremlin's strategy of enhancing control over the strategic energy sector by creating mighty state giants.

"In the context of consolidation of the two companies a tanker company is being created that will be certainly ranked among the world's five top tanker firms," Frank told Putin.

Frank, a former Russian transport minister, said the united company would have total assets of close to $5 billion. He said that the company might go public in the future but did not give other details.

State-owned Sovcomflot has a fleet operating 52 vessels with a total deadweight capacity of 4.16 million tonnes.

Novoship, or Novorossiisk Shipping Co., in which Russia has a majority stake, has 60 vessels with a total deadweight capacity of around 3.7 million tonnes.

In January, the state-controlled Rosneft and Sovcomflot set up a joint venture to serve Rosneft's offshore projects.

The merger comes amid rumours that Russia would split the rights to develop new offshore oil and gas fields between Rosneft and gas monopoly Gazprom, further limiting the access of private and foreign firms to energy resources.

This news is a total 899 time has been read