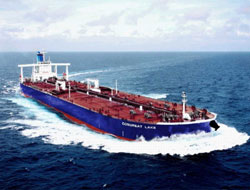 VLCC spot rates on all routes sank to their lowest for the year at just around WS 50 early last week.

VLCC spot rates on all routes sank to their lowest for the year at just around WS 50 early last week.

VLCC markets firmed this week, led by a 38 point climb in rates for voyages from West Africa (WAF) to the US Gulf. According to Fearnleys, WAF-US Gulf rates ?shot up in the wake of a strong suezmax market and limited VLCCs in the area.? Datas showed average VLCC spot rates on all routes sank to their lowest for the year at just around WS 50 early last week on the back of more than sufficient tankers to meet chartering demand. ?Rates in the VLCC market finally took a sharp U-turn, thus breaking the soft trend seen for some time,? said Fearnleys on Thursday.

Fearnleys pegged WAF-US Gulf voyages to have moved from WS 72.5 last week to WS 110 this week, while MEG-East voyages picked up close to 10 Worldscale points to stay around WS 70 for double hull fixtures.
One Singapore-based broker told Thursday that MEG-East rates "are already hitting WS 75" for some fixtures.

There are even rumours of an MEG-China voyage being fixed at WS 87 for late December loading.

Brokers had informed of at least two confirmed double hull fixtures to move 265,000 metric tonnes (mt) of MEG crude to Taiwan and another Far East port for December loading dates at around WS 62.

The current rate level of WS 70 on those routes have been achieved despite widespread belief that tonnage supply was outstripping demand, which has been slumping on OPEC cuts and a global economic downturn.

Now players say that the number of VLCCs being booked for storage purposes has been steadily increasing, and this could help cut tonnage availability and boost spot rates.

Singapore-based brokers have told of at least five VLCC fixtures for storage purposes concluded in the past few days.

The world's largest VLCC owner Frontline Ltd. is said to have leased out two VLCCs for storage with one more such fixture pending.

According to ACM Shipping CEO Johnny Plumbe, as many as 12 VLCCs and four suezmaxes have been booked with options to use them as floating storage.
Bloomberg on Thursday quoted another broker saying that the ?market is on fire? due to ?storage caused by the low oil prices.?

?That's cut supply and may have boosted the price [freight rate] an oil company paid by 20% compared with yesterday's single-voyage, or spot, rental rate,? he said.

Crude oil prices are currently at a three year low, and ?such an extreme case of contango wherein future prices are almost certainly going to be significantly higher will prompt traders, who can do so, to store oil for sale at a later date,? said one broker.

This news is a total 1300 time has been read