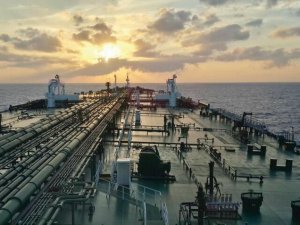 In an official statement issued to the Stock Exchange of Hong Kong, where the company is partially listed, CSET announced it has entered into a supplemental agreement regarding the construction of the VLCC with the vessel number T300K-91.

The supplemental agreement is for the VLCC to be constructed with dual-fuel technology. The reason according to the statement, is to “…prepare for the more stringent carbon dioxide emission standards under phase 3 of the implementation of the EEDI in advance and provide the company (CSET) with a new solution to the imposition of the global sulphur limit.”

LNG will be the main fuel in normal operation, and it is claimed the VLCC will produce 30% less carbon dioxide emissions in LNG mode and 20% less overall than traditional marine fuel-powered VLCCs. CSET has six VLCCs on order, four at Dalian Shipbuilding and two on order at Dalian COSCO. The company currently has a fleet of 43 VLCCs.

The design of the dual-fuel LNG-powered VLCC is based on the rules agreed in principle with DNV GL in 2015. At Marintec in China in 2015, it was announced the design complies with DNV GL’s gas-fuelled notation in its rules for classification of ships and the recently adopted IGF Code. The shipyard design was for an LNG-fuelled VLCC to use type C fuel tanks on the open deck, minimising the impact on layout and on cargo capacity.

The official disclosure of the price for LNG-power sets the benchmark for the newbuilding price and will also be a factor in the calculation of valuations of new VLCCs without LNG-power. But is LNG only a transitional fuel?