VLGC market will need year or more for balance 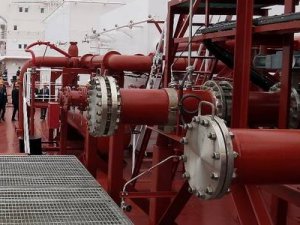 The very large gas carrier (VLGC) market may not be in balance until 2018, according to analysis from Poten & Partners.

The US Gulf-to-Asia trade remains a major driver of LPG shipping. But increasing cargoes out of the Middle East and other regions will keep a damper on the arbitrage trade that is critical to freight rates and VLGC demand.

Next year may be a trough as another 25 VLGCs join the world fleet but cargo supply remains flat.

“We can see some decent freight rates by 2018, but definitely not in 2017,” Panas said. “As always it is based on the level of US exports.

The outlook tallies with those of shipowners such as Avance Gas. Chief executive Christian Andersen has said 2017 is likely to be very weak for VLGC freight rates.

There are bullish factors that could spur VLGC demand in the near term. China’s Oriental Energy, which owns two VLGCs managed under the Helios LPG Pool, is starting up a new petrochemical plant that, at full capacity, would require up to 18 VLGC cargoes annually.

China’s Hebei Haiwei is also expected to start up a new petrochemical plant which could require up to 14 VLGC cargoes per year to fill.

Those two markets — Asia and the petrochemical industry — will be the major sources of demand for long-distance seaborne LPG cargoes going forward, Panas says.

Seaborne LPG volumes into Asia will increase by another four million to five million tons by 2020, largely driven by ongoing petrochemical demand.

Retail LPG markets in Asia, such as India and Indonesia, are not growing as rapidly due to limited port infrastructure, difficulties in onshore distribution and the need for ongoing government subsidies for consumers, Panas says.

“Petrochemical demand remains the driver of global LPG trade,” he added. “It’s gone away from the retail demand being the main driver.”

Other regions such as Europe and Latin America are expected to see small gains in import volumes, which can likely come from short-haul sources.

Much of the additional supply for Asia’s petrochemical industry has come from the US, which saw its LPG export volumes hit the highest levels ever this year with some 17.1 million tons exported up to August, according to the US Energy Information Administration. That is a 35% rise over the year-earlier period.

But cargo activity out of the US Gulf has fallen since May amid an increasing glut of LPG in world markets and diminishing returns from shipping LPG to Asia from the US. More than 40 VLGC cargoes were cancelled from the US Gulf between July and September.

Those cargo cancellations led to an increase in VLGC supply, which forced rates down to trough levels approaching $10,000 per day.

While US export volumes will likely resume their growth, Panas says they will increasingly compete against volumes from the Middle East.

Saudi Arabia’s exports have reached 8.8 million tons this year, up from 7.2 million tons in 2015. Iran, too, will be an increasingly important exporter thanks to development of its South Pars gas field. Panas says the country may be able to export up to three million tons of LPG by 2020.

The additional LPG supply means more cargoes for VLGCs. But they also mean world markets will remain full, thus limiting the amount of spot trading activity for VLGCs from the US Gulf, Panas says.

“Every new source of supply means more cargoes,” Panas said. “But if you create an oversupplied market, it limits the amount of spot trading.”

This news is a total 1408 time has been read
Tags: VLGC market will need year or more for balance