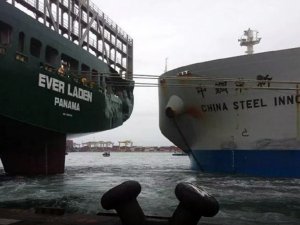 A VLOC ‘China Steel Innovator’ struck the stern of a containership ‘Ever Laden’ at Kaohsiung Harbour in Taiwan on Tuesday morning.

The incident took place while the VLOC was maneouvering at the harbour when it collided with Ever Laden which was already berthed.

China Steel Innovator had just arrived from  Australia and was loaded with ore. Both the vessels sustained damages.

The VLOC dropped both its anchors to reduce speed but could not avoid the collision. The reason behind the accident is yet to be ascertained.

This news is a total 790 time has been read
Tags: VLOC Collides with Containership at Taiwan’s Kaohsiung Harbour

Zodiac Maritime swoops for another capesizeEyal Ofer’s Zodiac Maritime has been identified as the buyer of the 2012-built 180,600 dwt capesize bulker Huge Hakata.