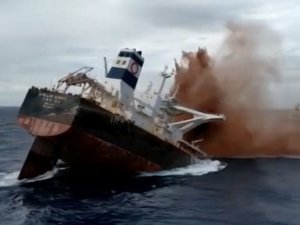 Salvors working the Stellar Banner wreck off the coast of the Brazil have scuttled the vessel more than three months after the it ran aground fully loaded with iron ore.

The vessel was refloated earlier this month following the removal of approximately 145,000 metric tons of iron ore from the vessel’s holds. Due to the condition of the ship, the decision was made to sink the vessel in deeper waters with any remaining iron ore on board. Authorities said they do not believe the remaining iron ore poses a threat to the marine environment.

A video of the scuttling operation is below:

The Marshall Islands-registered MV Stellar Banner ran aground approximately 100km from coast of São Luís on February 24, 2020, as it departed Vale’s Ponta da Madeira Maritime Terminal with more than 270,000 tonnes of iron ore bound for China. All 20 crew members were subsequently evacuated in good condition.

Very Large Ore Carrier is the largest classification of dry bulk ships in the world with ability to carry up to 400,000 tonnes of cargo.

Stellar Banner is owned and operated by South Korea’s Polaris shipping and is chartered to Brazilian mining giant Vale to transport iron ore from Brazil to China.

Soon after the grounding, Vale reported that, based on reports from Polaris Shipping, the vessel had suffered damage to its bow in the shipping channel as it departed the port and grounded to prevent it from sinking. Experts later determined from preliminary reports that the impacted portion of the Stellar Banner was of 25 meters in length near the starboard bow.

The salvage operation was led by the Dutch salvage SMIT Salvage with help from the Brazilian Navy.

This news is a total 743 time has been read