Volatility is evident in the newbuilding market 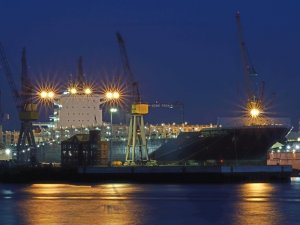 Market sentiment maybe in a better place over the course of the past few months, both in the dry bulk and in the wet markets, but newbuilding ordering activity is still showing large spikes week-in week-out.

In its latest weekly report, shipbroker Allied Shipbroking said that “the fluctuation in activity in the Newbuilding market keeps the market on its toes, with the scene changing dramatically even on weekly basis. After building a strong trajectory over the past couple of weeks, indicating that we have entered in a firm final quarter, this past week showed us in turn that the healthy volume noted previously can’t be taken for granted. It is true that the slight downward correction in the Dry freight market, which troubled most as to its underlining meaning, has played its part in keeping the order placing to minimum levels. Taking into account also that the Tanker side, after a rather vivid week, returned to the indolent mode previously noted, the two main driving sectors were now lagging in interest, unable to boost the activity further. Given the volatility and the fact that a small turn in earning and/or the outlook can be of immediate impact in the investment planning of the market participants, it wouldn’t be to anyone’s surprise if activity in terms of new orders was on the rise once more”.

Meanwhile, in the S&P market this week, Allied Shipbroking said that “on the dry bulk side, we are still seeing a fair amount of activity though slightly softer than what had been noted during the past couple of weeks. Interest amongst buyers has been curtailed to some degree by the slight correction noted recently in terms of freight rates, though this is only a short term effect and we will likely push back into firmer interest in the coming days. At the same time prices are holding steady for the time being, with a further boost in freight rates being now required apparently in order to pull up buyers from their seats and drive for further competition to be noted. On the tanker side, we had a notable rise in activity this week, with a fair amount of units changing hands even in the larger size segments. Despite limited information being reported in terms of pricing for these most recent concluded deals, it looks as though prices are still holding at their current levels and may well even have some slight price rises in stall as prospects start to perk up”.
In a note this week, VesselsValue, a ships’ valuations expert said that “values have remained stable this month again. “Suezmax Hull 1304 (158,000 DWT, Dec 2017, Shanghai Waigaoqiao Shipbuilding) sold for USD 49.8 mil, VV value USD 52.23 million”. In the bulker segment, “a slight firming in Panamax and Supramax values has occurred. Supramax Spring Eagle (58,500 DWT, Jun 2010, Tsuneishi Cebu) sold for USD 15.35 mil, VV value USD 15.28 mil. Open Hatch King Yukon (32,300 DWT, Mar 2009, Kanda) sold for USD 10.5 mil, VV value USD 10.46 million”, VV concluded.

In its own weekly report, shipbroker Intermodal noted on the demolition market that “we mentioned in our previous report that demolition prices in the Indian subcontinent had started displaying decent resistance despite the continuous declines average prices in the region had witnessed. It seems that this resistance was quickly translated into a slightly improving market last week and although enthusiasm is fairly restrained at the moment, the turnaround in sentiment – even if cautious – is definitely what the market needed following the past couple of disappointing months. The strengthening of local steel prices in the region during the past days has also supported demo prices, while given that the rather restricted supply of candidates is extending amidst a healthy dry bulk freight market we could see the market stabilizing around current levels at least in the short term. Saying this, the muted activity in China is still posing a big question mark in regards to how long it will take before the declining market there starts affecting Indian subcontinent prices as well, while the price gap between the two demo destinations has now extended above $140/ldt. Average prices this week for tankers were at around $245-410/ldt and dry bulk units received about $235-390/ldt”, Intermodal concluded.
In a separate note on demolition, Allied Shipbroking said that “as this week came to a close, we closed of a month where the sluggish attitude amongst the majority of breakers kept the recycling market in a bearish view. Even if the activity noted this past week showed a marginal rise in terms of volume, the appetite and the confidence that we had seen previously, seems to be left far behind. In the India Sub-Continent, India is getting a good momentum trying to catch as many demo candidates as possible. However, with Bangladeshi, and especially Pakistani buyers remaining very “selective”, focused more in handling their increased stock, the overall outlook has become slightly blurred, fretting market participants. Moreover, following the Communist Party Conference, the main interest stays in China, on how it will respond after a clearer orientation is set, with the initial indication being one of a significant softening in price levels quoted there. All in all, given the uncertainty in the tanker market and the “reins being pulled back” for dry bulkers, it is possible that we could well see things change again in favor of the demolition market, if breakers’ offered prices move accordingly”, Allied concluded.

This news is a total 1056 time has been read
Tags: Volatility is evident in the newbuilding market