Volume of Export from Turkish Ports Rose by 19 Percent 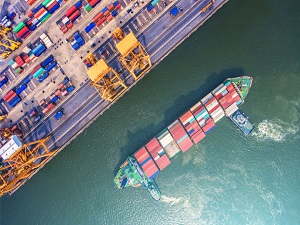 Port Operators Association of Turkey reports 2018 third quarter results. According to report; increase in volume of export from Turkish ports in the third quarter of 2018 is up to 19 Percent.

According to the latest annual statistics from Port Operators Association of Turkey, ports that capable of handling container ships of 2 million 440 thousand 721 TEU in total; increased by 3,8 percent in the third quarter, compared to last year.

As a vital point of Turkish economy; authorities pleased with results from the marine trade in the third quarter.

In the third quarter that including July, August and September,TÜRKLİM member ports, which have 92 percentage of total level of activity; handled container ships of 2 million 440 thousand 721 TEU in total;  with growth of 3.8 percent compared to the same quarter last year.

As one of the most substantial operation, transit transportation increased by 7.4 percent compared to the same quarter last year.

Gap Between Imports and Exports Shrank

22 million 510 thousand 757 tons were handled in general cargo transportation in the third quarter of last year, whereas it drops to 18 million 333 thousand 478 tons in this quarter.

Gap between volume of imports and exports was around 17 million 526 thousand 849 tons, whereas it shrinks to 12 million 402 thousand 622 tons in this quarter.